Le chagrin et la pitié (The Sorrow and the Pity) 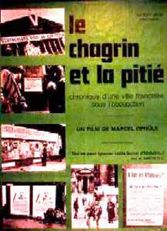 By focusing on the city of Clermont-Ferrand, French director Marcel Ophüls patiently assembles the most damning documentary ever on French collaboration with the Nazis in World War II. The film was banned in France for years. Hannah Arendt’s phrase “banality of evil” comes to mind, as most of those Ophuls interviews pleasantly and unapologetically discuss their activities in Vichy France. Politics is second to survival and personal vanity. The anecdotes are striking: Pierre Mendès-France recalling a successful escape from jail because lovers were making noise in the bushes near a fence. A vital piece of film literature.