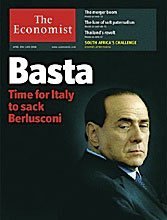 The Economist has long taken a detailed and critical view of Italy.
M

ake believe that you’re at the optometrist. These are the lines you’re told to read.

— “At first blush, life in Italy seems sweet enough. The countryside is stunning, the historic cities beautiful, the cultural treasures amazing, and the food and wine more wonderful than ever.”

— “All the world loves Italy because it’s old but still glamorous. Because it eats and drinks well but is rarely fat or drunk.”

Let’s look at a few more. Read this:

— “Yet beneath this sweet surface, many things seem to have turned sour.”

— “But these days, for all the outside adoration and all of its innate strengths, Italy seems not to love itself.”

Look carefully at this sentence:

— “The economic miracle after the second world war, culminating in the famous 1987 sorpasso (when Italy announced that its GDP had overtaken Britain’s), is well and truly over.”

— “In 1987, Italy celebrated its economic parity with Britain. Now Spain, which joined the European Union only a year earlier, may soon overtake it and Italy has fallen behind Britain.”

— “Rather like Venice in the 18th century, it has coasted for too long on the back of its past success… But such good things invariably come to an end. That is what happened to La Serenissma at the end of the 18th century. Venice was contemptuously swept away by Napoleon…”

— “Most worry … that Italy may share the same fate as the Republic of Venice, based in what many say is the most beautiful of cities, but whose domination of trade with the Near East died with no culminating event. Napoleon’s conquest in 1797 only made it official.”

First the good news. You don’t have double-vision.

The first group of sentences — beginning with “At first blush …” — were published in The Economist in November 2005 as part of its annual survey of Italy. The starkly critical assessment of Italy was written by John Peet, the magazine’s European editor. He hammered away at a theme that might be summed up by the title of BB King’s blues classic, “The Thrill is Gone.” Italy, he concluded, was in precipitous decline.

Peet may have been right — may still be right — but that’s for another time.

My quarrel is with the second group of sentences beginning with “All the world loves Italy…” and continuing “But these days…” and so on.

The juxtaposed lines are dreamily similar, as if two writers were in (accidental?) collusion or shared an uncannily similar way of perceiving and explaining the same subject. That’s where my charity ends.

The second lines in these clusters belong to The New York Times in a lengthy page 1 report about the maladjusted state of Italy published on December 13 — this December 13. The author was the Times’ Italy correspondent, Ian Fisher, with help from two assistants.

True, different authors are entitled to share a single conclusion. But so harmoniously? It brings to mind a quip attributed to billionaire John Jacob Astor IV when told the “Titanic,” on which he was a passenger, had struck an iceberg: “I asked for ice, but this is ridiculous.”

Elsewhere in his Italy piece, Peet writes: “Even Italy’s social fabric is under strain. …The fact that 40 percent of Italians are living at home is not just a happy sign of family harmony and attachment to mamma’s cooking.”

Fisher’s take on the same? “Doubt clouds the Italian family: 70 percent of Italians between 20 and 30 still live at home, condemning the young to an extended and unproductive adolescence.”

Italy has always been a favorite target for doom and gloom. Anglo-Saxons in particular find it maddening, corrupting, a beautiful place where little works systematically and the people, to quote another correspondents’ gorgeous line (the late Peter Nichols) are condemned to sleep to “the sleep of the over-realistic,” but never to dream.

Yet it’s alarming when two reports, two abundant years apart, overlap so seamlessly, as if Italy somehow deserved the carelessness of journalistic cliché because it is itself so often socially and politically irresponsible.

I do not know Peet. I do not know Fisher, who was quoted in Corriere della Sera as saying: “I came to Italy three years ago without prejudices. The idea for this story came from talking to people…”

No doubt it did. Ideas also come from reading those of others, and there’s no shame in it. Authors and novelists steal, paraphrase, abscond with. It’s their stock and trade.

Much in Fisher’s piece is not in Peet’s, and vice versa. But the spirit and wording of the two reports is uncomfortably close.

Peet: “The economy has … proved highly vulnerable to Asian competition, because so many small firms specialize in such areas as textiles, shoes, furniture and white goods, which are taking the brunt of China’s export assault.”

Fisher: “Worse, worry is growing that Italy’s strengths are degrading into weaknesses. Small and medium-size businesses, long the nation’s family-run backbone, are struggling in a globalized economy, particularly in low-wage competition with China.”

Fifteen years ago, incumbent President George H.W. Bush was pilloried for what was perceived as a fundamental shortcoming that he eventually labeled, with dubious eloquence, “that vision thing.” It cost him the 1992 election.

Reporters, regrettably, are not subject to monitoring regarding purity and originality of vision. At the same time, Italy has enough problems without a journalistic lynch mob that recycles platitudes for a living.

The Venice paragraph, in which Peet calls the city La Serenissima (“the most beautiful,” or serenely beautiful, its ancient name), and Fisher — apparently to avoid direct duplication — labels it “the most beautiful of cities,” is a deal-breaker. It’s paraphrasing at best. Sadly, since the Times and the Economists are churning behemouths friendly to one another, no one will notice. Or care.

To Peet, bravo (retroactively), though with caveats and doubts. Fellini intended la dolce vita as ironic. Real life was not sweet. (To be continued.)

To Fisher and The New York Times: Get your own vision — or risk looking Italian, which is to say second-hand and lazy.