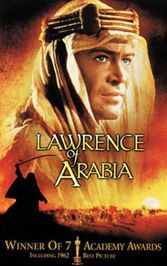 David Lean (“Bridge Over the River Kwai,” “Doctor Zhivago”) shifted the period’s epic focus from the biblical to contemporary history, to prodigious effect. “Lawrence” is among the most handsome and mesmerizing films ever made, with a Maurice Jarre soundtrack that gives the story orchestral clout. Lean dedicated himself to visual accuracy. He pushed his crew into Jordan, Morocco, and southern Spain for outdoor shooting (300 set-piece buildings were erected near Almería, Spain for the Aqaba scenes).

Quibble all you want about historical accuracy — some argue T.E. Lawrence was self-effacing about his Balfour-era Arabian adventures — Lean nonetheless frames a grandly affecting vision of British colonialism and the tribalism of Arab life that is both intriguing and beautiful to behold. Peter O’Toole as Lawrence is at his boyish, flush best, with Alec Guiness, Jack Hawkins, Anthony Quinn and Omar Sharif flanking him admirably.

The three-hour movie, filmmaking as artistry, was restored and reissued in 1989 to include cut scenes that hinted at Lawrence’s homosexuality. Honestly, the original is tighter. Widescreen viewing is a must.