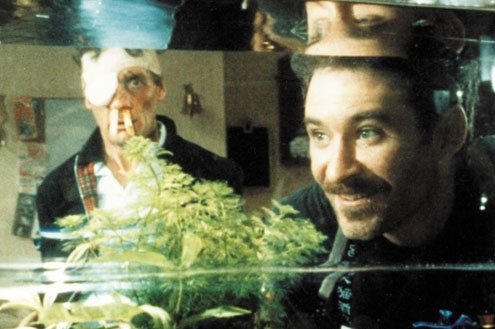 inding a groove for 1930s-style screwball comedy in the age of irony has proved elusive. Sarcasm limits zaniness. Leave it to John Cleese (of Monty Python fame) to ignore the signposts and forage for absurdity. “A Fish Called Wanda” (1988), which he co-wrote, is appropriately billed as a tale of “sex, murder and seafood,” a juxtaposition that by itself suggests fine screwball is in the works.

Loopy grifters Wanda (Jamie Lee Curtis) and Otto (Kevin Kline) arrive in London to team with George and Ken (Michael Palin) on a diamond heist. Mission accomplished. But Wanda and Otto get greedy and blow the whistle on (never seen) George, who’s in turn one step ahead of them: he’s hidden the stash.

After that comes the comic history of treachery. Wanda tries seducing George’s stodgy lawyer Archie Leach, played by Cleese who appropriately borrows Cary Grant’s birth name. Wild Wanda can’t decide what she likes most: diamonds, sex or foreign accents. Then there’s Ken, who stammers. And psychotic Otto (Wanda’s secret lover), a former hit man unable to tell the difference between malice and mice. Meantime, small dogs get crushed and goldfish suddenly prove perishable. Curtis, given a name like Wanda Gershwitz, hams it up; Kline and Palin are over-the-top; and Cleese is the calmest kind of facilitator, as if approving of the goings on. He should. A 1997 sequel, “Fierce Creatures,” fell flat.

Screwball peaked in the late 1930s, before World War II pushed the focus away from comedy and toward a slew of potboilers. A popular writing practitioner was Elisabeth Sanxay Holding, who shifted from romance novels to detective fiction (Raymond Chandler labeled her the “top suspense writer of them all.”) Her 1947 “The Blank Wall,” already made into a film in 1949, forms the backbone of “The Deep End” (2001), a jarring, offbeat thriller that exudes postwar darkness.

Directors Scott McGhee and David Siegel set the action in the present, in Lake Tahoe, where Margaret (Tilda Swinton), the wife of a naval officer away on sea duty, disposes of a body to protect her wayward son Beau (Jonathan Tucker) from potential murder charges. The hide-the-body conceit was typical of postwar crime thrillers, but the gifted Swinton dials up the tension. Just when she thinks Beau, who is gay, is in the clear, mysterious Balkan Alek (Goran Visnjic) enters the scene. He knows what happened and wants 50 grand in hush money.

Watching Margaret’s quandary pick up speed looks and feels like dirty bath water moving toward a vortex. The underrated Swinton is riveting, while talented Croatian Visnjic emits a neat combination of menace and empathy.

Patrice Chéreau’s 2005 “Gabrielle” delivers a more literary kind of menace, courtesy of Joseph Conrad. Comfortable in a staid, decade-old marriage, highbrow publisher Jean (Pascal Greggory) is startled to find a farewell note from his wife Gabrielle (Isabelle Huppert) in their opulent Parisian home. But she returns moments later, apparently having chosen loveless wedlock over a stirring but doomed affair.

A portrait of an ill-fated marriage, Chéreau’s movie depends on Conrad’s rich, taut prose from his story (“The Return”) and the brilliant interplay between Greggory and Huppert.

This is an action movie made from gestures. Hemmed in by sensibility, Jean and Gabrielle eventually bloody etiquette’s stiff upper lip to get to a more palpable hurt. Their repartee is caustic, ironic, and morbidly curious. Jean, who narrates, strikes a tremulous balance between wronged adult and woe-stricken child, while Gabrielle’s arctic passion builds effortlessly into stubborn despair. Conrad intended his story, a minor one at best, as a parable about the British class system. But Chéreau shifts the setting to pre-World War I France, blowing away the posing that was the Gilded Age’s stardust.

Though the fraught narration and musical interludes can be burdensome at times, there’s no taking your eyes off Greggory and Huppert (like Burton and Taylor in “Who’s Afraid of Virginia Wolff.”) Chéreau’s affection for period-piece detail (watch the maids and the kitchen) gives the picture a Vermeer-like quality.