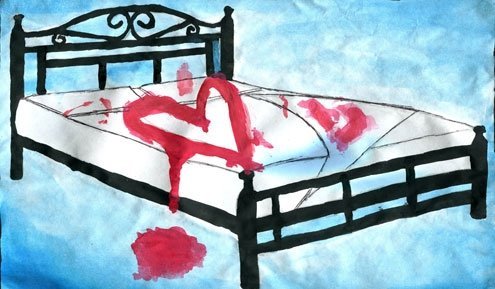 Scrubbing away: The screwball side of close encounters.
M

y job can be funny at times. Maybe it isn’t your average humor, but it’s still hilarious, at least to me. Some moments and memories still make me laugh out loud.

Take the client who owned a bar near my house, which is where we met for the ritual “interview.” But before the meeting came the phone calls. To say this man liked chatting is an understatement. Before we met he repeatedly called me to tell me about his sex fantasies and find out “how far” I could (and would) go.

This got tedious because I’m not a phone-sex service. Still, I went ahead with the interview, which he decided he wanted to stage. I should come in wearing a sexy dress but not announce myself. The idea was to enter, sit down, and come on him, he explained. Why not? It sounded interesting enough.

So I dressed up in a modestly sexy way and entered the empty bar (“bar” may be too flattering word for that little dive) where I saw my potential client (who had never seen me), approached him, and ordered a cappuccino. Then, I started… seducing him. I jiggered a strap so my red bra showed. I pretended it was hot and wearily stroked my neck and décolleté. I hiked my skirt to my knees.

After which a strange thing happened. Instead of talking to me he sent me a text. “Are you in the bar?”

My God, I thought to myself, the place is empty. “Don’t you see?” I answered.

Then came the answer: “Wooooow!”

Okay, I thought we were finally done with the “preliminaries” and would start… talking. But no, more texts arrived. I looked at him closely and saw that he was completely lost and nervous. The poor guy even had a tic, with his head shaking every five seconds or so. His lips trembled.

I honestly didn’t know what to think. Should I be pleased at all this excitement? But after 15 minutes of useless text messages, the game got boring. I sensed the guy had overestimated his ability to handle the situation. He was out of his depth. I decided to leave. But when I went to pay he pretended not to recognize me. Now his hands were shaking. The guy was scared, as if I’d been transformed into a potential serial killer. He could barely dole out the change.

As soon as I left, he trailed after me, begging me to come back. I didn’t of course. I just kept walking down the street. I had to laugh. I stopped communicating with him.

Later, I got an email from another potential client, or so I thought. We started chatting. You guessed it: the same guy. He’d changed email. Please stop, I told him, this time for good. Next came a message laced with insults and obscenities. There’s no immunity from such people. All you can do is laugh them off.

Another client was a gallant Italian in his late 40s who pleasantly wooed me before our assigned meeting. When we finally met, he told me we were headed to the house of a friend who had kindly agreed to clear out for a few hours to make way for us. Good friend. Oh, and this friend lived with his girlfriend.

Everything went well enough until he spotted a blood stain on the sheet. It was mine. I’d miscalculated. After which the movie skit began. My client, seeing the stain, lost his mind. Panic doesn’t describe it. He started running around the apartment looking terrified. What would his friend’s girlfriend say? What would his friend say?

He then hysterically attacked the stain, trying to wash it out. But that only made it spread downward toward the mattress. He was too busy cleaning to blame me. Could I please hold the sheet up while he washed it? I had to work hard to stifle a laugh. I was suddenly a character in a screwball comedy. This went on for an hour. In the end, the red was gone but everything was soaked. Amazing.

Much to my surprise, he got in touch again, this time inviting me to his apartment while his wife was away with their kids. The only thing that went through my head was, “No more miscalculations.”

Finally, there was the American, also in his 40s, an easygoing and funny guy I clicked with during the interview. He poked fun at me and I tried responding. But I really wanted to even the score.

I got my revenge at his hotel. I took a shower, came out covered only in a towel, lay down on the bed, and looked at him seductively.

“There’s just one thing that I want to tell you before we start,” I said.

“Sure,” he said, smiling as usual.

My God. The look on his face would have made a photo to keep for a lifetime. Horror, shock, and fear, with a side order of numbness.

But he wouldn’t believe me until he saw “proof,” after which came a huge pillow fight. I won.