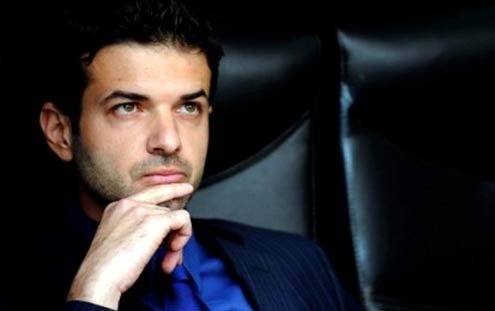 Rome-born Andrea Stramaccioni, the youngest Serie A head coach at 36, is transforming Inter.
I

n a season of turmoil, which had seen Inter Milan stumble from one setback to the next under the experienced leadership of Gian Piero Gasperini and Claudio Ranieri, club owner and president Massimo Moratti shocked many last March when he appointed the much younger and less well-known Andrea Stramaccioni to manage the team.

The 36-year-old, affectionately nicknamed ‘Strama by his friends, had already enjoyed considerable success with Inter’s youth squad, winning the inaugural edition of the NextGen Series (a European club cup competition for under-19 footballers). Since the Rome-born manager took charge, Inter has seen a marked improvement in results. Under his late season leadership, the team picked up 17 points in the final nine matches of the 2011-2012 Serie A season, including a breathtaking 4-2 victory over cross-town AC Milan in the Derby della Madonnina.

The positive run helped Inter qualify for the Europa League, UEFA’s secondary cup competition, where it has already reached the knockout stages. Silverware could be in the offing. This year’s objective is a return to the Champions League, for which Inter is already making a strong case.

After last season’s early travails, Stramaccioni was tasked with freshening up an aging side and squeezing the best from the club’s star talents. He’s succeeded — at least so far. Summer signings Rodrigo Palacio and Antonio Cassano have helped form a deadly three-pronged tridente alongside a resurgent Diego Milito.

Defender Andrea Ranocchia has also regained the form and confidence that eluded him last season, particularly since being paired with another new acquisition, 21-year-old Juan Jesus.

Fredy Guarin has settled well on the right-wing in ‘Strama’s preferred 3-4-3 formation, while the development of Philippe Coutinho in the trequartista (playmaking) role has been fundamental (particularly given Dutchman Wesley Sneijder’s likely departure after months of contractual haggling.)

Stramaccioni has clearly restored his side’s confidence. It has won an impressive four matches against clubs currently occupying the top seven positions in the division, including a 3-1 triumph over Juventus in November that ended the league leaders’ 49 game unbeaten streak and marked the Turin team’s first defeat at their new stadium.

Though Stramaccioni’s critics say he relies too heavily on counter-attacking football and assail his tactical cautiousness, the results don’t support their quarrels. Results show that Inter is not a possession-oriented squad, doing far better when it uses counter attacking as its primary weapon.

The pattern extends into matches against inferior opposition. Inter enjoyed the lion’s share of possession (an average of 61 percent) in losses to Siena, Atalanta and Parma and a 1-1 draw against lowly Genoa. Inter’s recent 1-0 loss to Lazio — Miroslav Klose scored late in the game — will no doubt have provided Stramaccioni with food for thought. He was again roundly criticized for his negative tactics, since Inter again opted to counter-attack against a top Serie A side, but this time to little avail.

At the same time, Inter twice struck the Lazio post, proof again that football is decided by the finest of margins. Had both efforts found the back of the net, few would be second-guessing Stramaccioni’s tactics.

Though Inter clearly looks out of its comfort zone when straying from the counter-attack, ‘Strama’s defensive emphasis has paid dividends. The team has conceded 19 goals in the season’s first half, compared with 55 shipped last term.

Persistent critics also need to ask themselves another question: When has a side’s penchant for counter-attacking — known in Italy as contropiede — not suited both Serie A and the country’s football philosophy?

Scroll back to 2009-2010, when Jose Mourinho, the Special One, assembled an “unfashionable” if lethally efficient squad that outfoxed the attacking stratagems of both Barcelona and Bayern Munich. Inter won the much-coveted Champions League as part of a historic treble that also included the Serie A and Coppa Italia titles.

Though Mourinho comparisons should be made gingerly, there’s little doubt Stramaccioni has revived some of the crucial qualities that helped make the Portuguese manager’s San Siro term so successful and have been desperately missing since he left for Real Madrid.

Inter again has a self-assured leader who can stand on the match-day touchline knowing his players will follow his instructions and implement a well-honed game plan.

‘Strama’ had the last laugh, almost alla Mourinho. One gets the feeling that more such last laughs lie ahead.