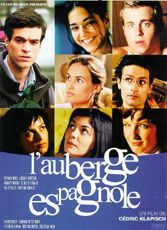 In this Cédric Klapisch film, Xavier (Romain Duris) leaves his native Paris to study Spanish in Barcelona. He rents a room in a large apartment with five fun-seeking students — British, Italian, German, Spanish and Danish. In this mini-EU there are no fake accents but great wordplay (see it in the French original). At one point, British student Wendy (Kelly Reilly) answers the apartment’s one phone and gets Xavier’s French mother. She wants to know if her son is “à la fac?” (in French “fac” means faculty, or college; the English enunciation is something else entirely.)