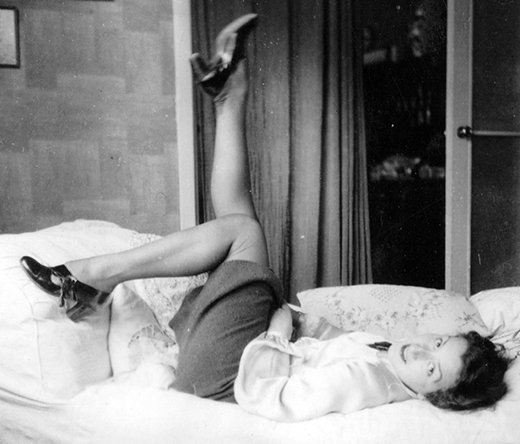 In pre-war Warsaw and Rome of 1940 (above and below), the author's mother ensured she was camera-friendly.
I

never liked vanity, let alone its fairgrounds. Self-effacement governed my mood. Imagining an exuberantly selfish president like Donald Trump, let alone the prospect of his daily five-alarm ego, would have undone my once-Calvinist mind. Vanity’s pomp might make high mass seem higher or litter catwalks with glitter, but the lime in that light vexed me no end.

My perspective changed in 1988, the year a fairly dull former vice president named George Bush took over the White House, and my mother, not far away, lay dying in a tidy bed of a tidy ward in a well-established Washington, D.C. hospital.

She’d been stricken suddenly in Rome, and 11 months later ran out of time. Her own decay amazed her and the misery seemed to her so entirely unfair.

The afternoon of her death began with a sudden downturn that kindled medical commotion around her otherwise quiet single room. Vanity’s first move, in fairness, belonged to her attention-hungry illness.

Her doctor was summoned urgently, nurses exchanging coded omens in the interim.

My mother heard none of this. She instead woke later from a cold stupor and commanded me to come to her side. I told her that her doctor was on the way.

“No!” she cried. I took this first as a pre-death effort to bar the messenger. But it was nothing so heroic.

“Get me my brush,” she ordered. “I will not let that man into my room in this condition. My hair is a mess. I need time to fix it.”

This was not the captain of the “Titanic” denying the existence of icebergs.

No, it was vanity and decorum conspiring to keep up appearances at any cost, including lost ones.

If my mother had to capitulate, she was intent on looking her best, since she’d soon be in the presence of the doctor who early on had told her she stood little chance. Ideally, her combed hair would at the very least hush him.

The scene was both mad and absurd, a small event, one death, pitched against the backdrop of so much intense if fleeting emotion. For her, staging the architecture of her own end was part of a hopeful drama intended to make death think twice. Her rssolve was such that perhaps it did, at least for an instant. Hers was the stubborn scheming of the Christmas Day baby she was, forever dreading the idea of being overlooked in favor of an imortally holy baby. This instead was her moment, and no one could or did outperform her.

I spent 15 minutes combing her hair and buttoning various buttons and attaching several pins. Following meticulous instructions, I re-assembled a semi-comatose woman for her last performance. Twice, she had me prop her up so she could see herself in the room’s tall mirror (wheeled in at her request).

This wasn’t Trump-like preening, which can exude infinite vulgarity, but a wholesale tidying up tantamount, say, to making sure every last green at your country club golf greens is resplendent before the coming flood.

When the doctor, his surname was Havel, arrived, she was firmly sitting up and in charge of what was said. She demanded explanations about this and that. She issued a near-surly lament that then dissolved into a plea that he please stop the disease at once.

Dressed in a navy-blue blazer and tie, he said as little as he could. And soon he left.

No happy ending here. She died hours later, slumped and soon stone cold in my arms. The nursing staff let that scene sit for nearly an hour.

I like vanity no more now than then (Calvin still tugs at me). But I understand it better, as well as those who depend on it to fortify their identities, imagining walls — in vogue these days — against any and all challenges.

The vain see themselves as larger than life, which they may well be in some circles. Until some Dr. Havel comes knocking and even the best showing off proves meaningless.