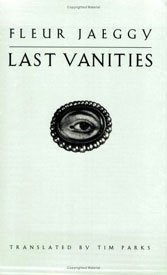 By Fleur Jaeggy, translated from the Italian by Tim Parks

Puncture wounds make for seven stories that leak. Jaeggy’s human furniture is tidy, even pretty, until limbs and minds break loose. Even gifts are avenged.

Marie Anne loathes her newborn daughter and promises the infant to childless parents. A change of mind makes for calamity. Butcher’s wife Gretel sires only daughters. Her husband calls her a good-looking heifer. “She would like to show her husband she knows how to kill.” Mr. Heber is dedicated to lakeside house he runs for half-wits and social outcasts. But Mrs. Heber thinks he spends entirely too much time among “these creatures.” She spies and finds a girl, who wields a hammer.

Good news is bad. Hans and Ruedi, orphaned identical twins, return to their birth-home and sleep in the same bed for a lifetime, make love even. Pastor Brandl objects to them. Why should he give last rites to their St. Bernard? “You can’t give last rites to a lettuce, can you?” The twins ignore him and build coffins.

Union includes “mental murder.” Kurt Kuster is “crestfallen” when he discovers his wife of 50 years isn’t dying. He goes mad, wants to fly. Verena Kuster allows him proximity to windows.

Only one story, “The Promise,” relieves the existential fury. After three decades of companionship Vreneli, Ruth’s childlike partner, insists on being buried in the family tomb. This she gets. Because Ruth insists.

People are naturally vain and vanity, like death, contaminates. Self comes first. “Sacrifices are never returned.” Not even the identical twins are immune, two vanities as one.

Jaeggy is a Swiss witch impressively self-appointed to clarify and revere “the stealthy tread of catastrophe.”