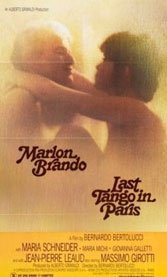 Innocence lost is hotter and heavier when innocence itself is a non-starter. Bertolucci, long fascinated by culture clash (he moved from Italy to Mahattan and later filmed in China), got his ducks in a row for this perfectly situated 1970s love story, an explosive mix of feminism awry and cruel machismo against a moody Parisian backdrop.

Widower Paul (Marlon Brando) meets engaged Jeanne (Marie Schneider) when both are apartment-hunting. Weird sparks fly. They swiftly sex up the empty joint, but always anonymously, like alien ships ramming each other to see which one gives first, and from what blow. Aside from Paul’s recollections neither one really knows what to say. The means and tools of grunting are their best agreement. Jeanne agrees to her own violation. It’s meat-and-bones eroticism.

Paul will flee, only to be later stricken by intimacy, which suddenly occupies the space he’d saved for lust, and he returns, now wanting her for real. But by then Jeanne has also changed: She’s angrier, sharper, less willing to play the incidental game. Bereft of anonymity, the sex game turns sour, a scenario middle-aged men only know to fix with declarations of love.

Brando is an egomaniacal lug, a roving piece of devastated flesh. He’s way past contending for anything (his wife, after all, committed suicide). Jeanne (all at once compliant and vulnerable, a mood Schneider would later loathe and decry) is acting out a phase of adolescence, something brittle and shatterable.

Bertolucci, lambasted for sex scenes that honored male conquistador tendencies, told critics and interviewers that the movie was part of an extended reverie, a portrayal of the beauty and peril of knowing everything and nothing, of using sex alone as a method, but few believed him, choosing an all-aghast prurience few at the time knew to stand back from.

Pauline Kael, who loved the way the film unsettled the then-known universe, concluded concisely: “For adults, it’s like seeing pieces of your life, and so, of course, you can’t resolve your feelings about it — our feelings about life are never resolved. Besides, the biology that is the basis of the ‘tango’ remains.”