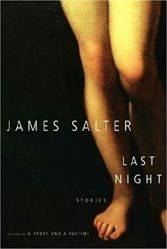 Salter’s method is painstaking. It’s one flawless sentence after another. From twigs, he make carpets of mood.

In “Eyes of the Stars,” a moth sticks to a windshield. “Stubbornly, it clung like grey ash but thick and trembling.” That’s how these stories are. Stubborn in their sadness, they’re thick and tremble.

Salter’s themes are loss and aging, too much drinking and the perils of frivolity. He’s a male writer — comparisons to Hemingway and Richard Ford are inevitable — but portrays women effectively and with a compactness of yearning.

The title story, about a failed assisted suicide, uniquely juxtaposes compassion and betrayal. The story ends, “That’s just the way it was.” Salter is acutely obedient to disillusionment.

In “Palm Court,” Arthur hears from Noreen, the woman he should have married. They reminisce. At the end, Arthur senses the empty “great central chamber of his life” and bursts into tears.