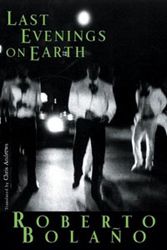 In the story “Dentist,” the narrator is suddenly seized with dread, a common occurrence in Bolaño: “We were venturing into dangerous territory,” he says, “from which we would not be allowed to return without having paid a toll of pain and estrangement…”

Bolaño is a manufacturer of charismatic nightmares. Several stories, including “A Literary Adventure,” “Phone Calls,” “Last Evenings on Earth,” and “Vagabond in France and Belgium” are told by “B” and portray exile as a state of madness populated by eccentrics, prostitutes, poets, cliff divers, and women on the edge of death by sadness. “Anne Moore’s Life,” the most startling tangent, is an American woman’s strange life story from 20 to 40. At one point Bolaño (who sets most of his narratives in Spain and Mexico) concocts the phrase “irrationally festive,” and that’s what these stories are — waves of poisoned wakes laced with satire. “For me,” he writes in the closing “Dance Card,” “the eleventh of September was a comic as well as a bloody spectacle.” Tasteless? Not in the least. Someone alive had to speak from the dim corridors, which Bolaño — Chile’s Nathaniel West — did until 2003. Then, the sadness killed him, too.