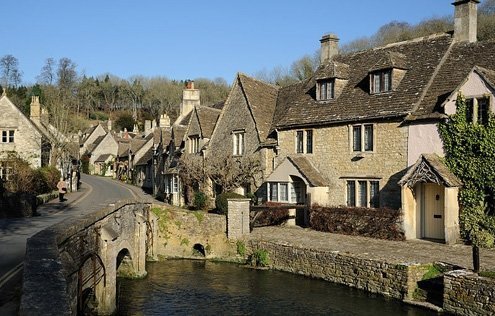 Cotswold towns may all look alike but at least tourism keeps them relevant — unlike many of their Italian counterparts.
I

just came from the sort of long weekend senior citizens dream of — to the Cotswold in south-central England. We ambled through tiny and picturesque towns, while we marveled at the various interpretations of thatched roof and stone cottages.

Well, to be perfectly frank, it was my mother and mother-in-law who admired the lintels. I tried my very best not to kill us all as the only person brave enough to drive a manual rental car on the left-hand side of the road. I stalled in the middle of a roundabout, tried to take numerous sharp right turns in fourth, cut off two trucks and an ambulance, and almost killed Bambi. All in three days. And that wasn’t even the worst of it.

Looking at those perfectly preserved hamlets where not a daffodil was out of place and parking cost £4 an hour, I realized that I am living in a dying Italian town. Over the pond and quite a few more kilometers towards the Mediterranean, we haven’t been able to preserve our heritage with the same sort of panache as those who Rule Britannia.

Cards on the table. All the Cotswold villages look the same. With urban development pushed to the outskirts, the towns have taken on a movie set quality. Pretty, but pretty uninspiring. As you weave your way past the tourists, tourist shops and ducks, you don’t get the sense that you’re living in a small English village. You get the sense that you’re in a theme park village… with ducks. There were just so, so many ducks.

That said, I admire the British sense of posterity. After World War II, Italy had to build a lot of homes quickly and cheaply. Cue the post-war palazzos. These multistoried blocks of cement come in the most titillating colors. Six stories of salmon pink? Yes, please! What about puke green? Half yellow, half fuchsia? Or perhaps simply exposed rendering in a dilapidated grey with bits missing? Yes, yes and yes!

In my small Tuscan town, these palazzos crown the oldest section, sullying your view from the moment it appears in the horizon, right up until you are within touching distance of the Sienese fortification. And because the Italians are true pioneers when it comes to forethought, they have made these palazzos the norm for architectural design. Your standard villa in the Tuscan countryside is about as romantic as a cardboard box, except it comes in pastel with an external staircase and terracotta tiles. Or you can feast your eyes on my apartment, which is such a vibrant shade of coral; we have to fight the Ibiza partygoers off with a stick. They simply can’t believe they aren’t tripping.

I have no grounds to blame the dying status of my town on the architecture alone. What modern twenty-something wants to live a place where the most exciting thing to happen in any given week is the Saturday market? In fact, so few bambini live here that the fight to keep our schools open is ferocious. In the past, officials have even paid young people who have no intention of attending secondary school to register just to keep the numbers up on paper.

And as the nonnos and nonnas drift off to an eternal sleep, their houses join the hundreds of others that can’t be given away. They slowly decay as every second shop goes bankrupt and all that remains is a mess of retro hairdressers and gas retailers/florists.

Our atrocious architecture is no more than a symptom of a bigger problem. Don’t tell me young Brits are lining up to live in the Cotswold. They don’t want to be there anymore than my Beyoncé-loving students want to be in Manciano. But as locals leave, tourists and purists (and ducks) arrive in droves, and despite its fantasy atmosphere, it is a beautiful place to be.

On any given evening, my small Italian town is deserted. Not a soul is partaking in the stereotypical passeggiata that made Italophiles dream of visiting country Tuscany almost as much my lactose intolerant mother wishes she could have a chocolate gelato.

And while we might have beautiful neighbors, we live in a town whose most enticing feature is actually its view of other towns. Squint hard enough and, yes, why there’s the mythical Tyrrhenian Sea — a sight only desperate locals (my husband included) try to convince you to see by climbing the 45 steps up the castle watchtower.

It’s sad to think that many of Italy’s small towns aren’t, like the Cotswold, trading locals for tourists just because of bad postwar architectural decisions and having chose to overlook the concept of heritage preservation. My mother’s emptied out town in Southern Calabria is case in point. It’s home to no one other than my bearded great grandmother, a couple of donkeys (probably distant relations) and an enviable view of all the smarter people who moved across the valley to another bigger town. And there’s not a camera-toting tourist in sight.