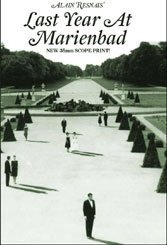 “Last Year at Marienbad” (“L’Année dernière à Marienbad“) is stripped of the medium’s basic tenants: narrative (forget about it), coherence (no action), and reason (there is none). Which is why the leftovers — nameless characters, beatific visions — confound like an absurdist poem.

If director Alain Resnais’s 1961 experimental film does have a point, it’s to put feelings ahead of logic. X (Giorgio Albertazzi) meets A (Delphine Seyrig) at a party. Some party, since everyone looks like they’re waiting for the guillotine to fall. X insists that he and A met before — and were lovers, too — a year before in the Czech town of Marienbad. A denies that they’re anything but strangers until X shows her photographs to prove the affair happened. Now A doesn’t know what to believe. Nor does jealous M (Sacha Pitoeff), who may or may not be A’s husband.

Meanwhile, the party continues. Set in a rococo castle (“sumptuously, yet coldly, decorated,” as one attendant describes it) Resnais gives few insights into what’s happening other than the unknown narrator’s warbling voiceover. Often the narrator documents only what the viewer already sees: “Empty salons. Corridors. Salons. Doors. Doors. Glass objects, objects still in tact, empty glasses.” Competing with the narrator’s voice is a drowsy but carnivalesque organ piece, music so menacing it commands viewer into a dream state. Adrift, the partygoers continue their bored partying, walking the haunted geometry of the chateau’s French garden where the people cast shadows but the trees do not.

Though little else happens, the film still possesses airtight mystery. Resnais puts the slow pace to work and hypnotizes the viewer with anticlimax after perplexing anticlimax. Ultimately, the film is a gorgeous segue from mundane life: the present confuses itself with the past, and déjà vu becomes the future. Author and fellow French filmmaker Alain Robbe-Grillet wrote the Oscar-nominated screenplay, which he based loosely on Argentine novelist Adolfo Bioy Casare’s enigmatic 1940 novel, “The Invention of Morel.”