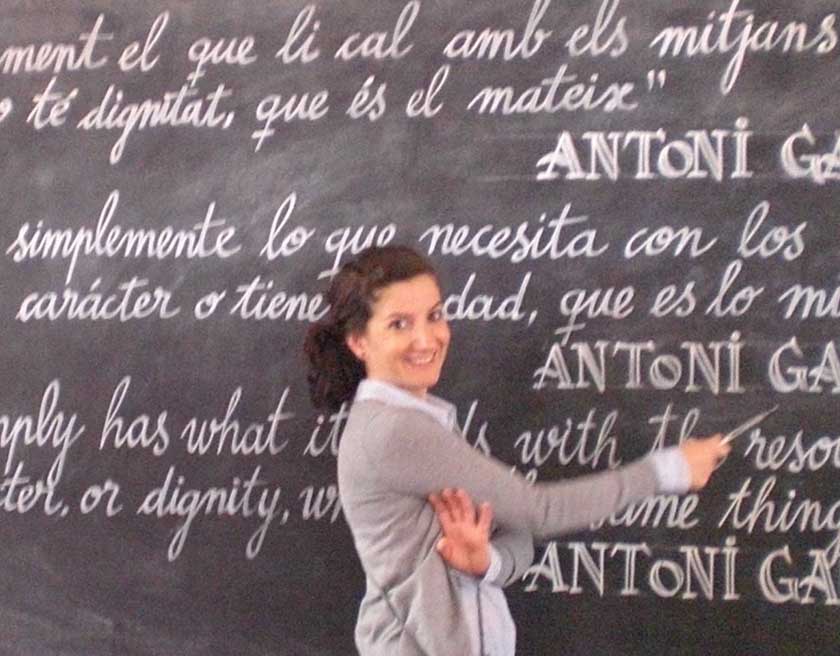 If German was stern, Italian was sweet.
L

ike many people, I started riding a Peloton exercise bicycle during the pandemic. I’m not a huge fan of indoor exercise, but jogging gets tedious, and it’s hot in Florida. And the Peloton is designed to get your heart rate up.

My favorite class is taught by a German woman who speaks with a Teutonic cadence. Called “the classical music ride,” it includes “Pachelbel’s Canon” and “light” classical music, such as movie theme songs. That I don’t understand what the teacher is saying, apart from the numbers, has little to do with the mix of music and intense instructions.

All this hubbub makes me forget to state the obvious: that Teutonic syncopation isn’t an accident, nor is the teacher speaking with a heavy accent. No, the class is conducted entirely in German, a language I don’t know — though I’ve attempted to learn it twice, but clearly I failed.

Daniela, my Italian tutor — she has enormous glasses and a big smile; thin, black hair; and legs as skinny as her wrists.

My first attempt at picking up German, as a child, was at a music camp that offered German instruction. I never got further than the numbers, which I still remember. Years later, during my gap year in Europe, just before college, I again attempted to learn German. This time I actually tried. I was in Oxford, England, for the fall, doing all sorts of studious things, including taking lessons in both Italian and German — as dissimilar as two languages get. Both classes were taught by private tutors. I was doing all this because I knew I would be going to Germany for the winter and to Italy in the spring.

My German tutor, who I’ll call “Heidi,” was orderly, demanding, and kind. She offered me cookies and tea at every lesson and made sure that I left before dark. She was also frustrated at my lack of progress and not shy about telling me so.

My Italian tutor was Heidi’s opposite number. Here’s how I described her at the time, in one of my many journals: “Daniela, my Italian tutor — she has enormous glasses and a big smile; thin, black hair; and legs as skinny as her wrists. She wears tights and cardigans (always bundled in them) and walks around with headphones attached to a belt around her waist.” I recall that she was a PhD student in classics, and that she had an Einsteinian frock of black, curly hair. Her apartment reeked of espresso, and it was always very dark, in part because my lessons were at night. She always seemed a bit distracted, and I left wondering what I had just paid her for. My progress in Italian was also minimal.

Based on these experiences, I didn’t think that I would continue with either language. And then, of course, everything changed once I went to the countries where they were spoken. My German winter was mostly sad and lonely. I went for hikes in the woods, learned to cross-country ski, and struck up only a few conversations with elderly people on park benches. I abandoned any desire to learn German.

I left for Italy in late March, just as spring was beginning. There was a variety of scents in the air: jasmine, fennel, and pizza bread. I felt more alive than ever. I bought my first pair of pumps, my first bikini (navy blue, covered in strawberries). I wore short skirts. I drank espresso and smoked Diana cigarettes and talked with my hands. It was all rebirth and self-discovery, and the Italian language was a great vehicle for that. It was more staccato than English, more dramatic. It didn’t let me hide, even if I was going to be quiet in it too. But despite my shyness, I could pretend a bit of boldness in a language that was not made for the meek. It helped that people engaged with me. They forgave my linguistic mistakes and encouraged me to keep talking. Not surprisingly, a few years later I learned to report in Italian — the language that broke me out of my shell and into a profession that demands a certain assertiveness.

I’ve told people that Italian, for me, is the language of life. Meaning I focus on living in Italian, not writing and reading.

I’ve told people that Italian, for me, is the language of life. Meaning I focus on living in Italian, not writing, not reading, or even thinking — at least not on over-thinking. The language of daily interactions, not my interpretations of them, fulfills me. Italians are intuitive and direct, compelling me to be the same. I suppose the language reminds me — even now, despite having strayed from daily usage — that life is for living. Not just thinking and writing, even if my life is also filled with those activities.

I have a picture of myself from that first Roman spring in which I’m sitting outside a café in Rome’s Campo de‘ Fiori, or “field of flowers.” For years, my late mother kept the picture on her dresser, and I sometimes cringed at its imperfections — my messy hair, bit of acne, purple-and-white gingham shirt bought on the street that I somehow felt was stylish at the time. Fashion faux pas aside, now when I look at the picture, I see what my mother must have seen: I looked happy. My smile was genuine, but it came out mostly through my eyes. I was blooming like the flowers around me.