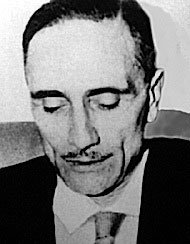 t must be clear — perhaps too clear — to readers of this column that I have a crusade about stereotypes in writing on Italy and Italians. So I was happy that one of the nicest things in life — a book recommendation from a reliable friend — also brought me an odd ally; Florentine writer Tommaso Landolfi. My friend was on a Landolfi binge, chewing locust-like through his fiction and essays. Soon the essays in “Se non la realtà” had me sucked in too.

Published in Il Mondo between 1952 and 1959 and now collected in an Adelphi edition (Adelphi Piccola Biblioteca 503, Milano, 2003) each of these short articles purports to cover an individual Italian locality; Alassio, the Gulf of Naples, Venice, San Remo, and so on.

I won’t give any background information about either the author or the essays themselves because I don’t know myself, and have no intention — for the moment — of finding out. Landolfi’s Italy is a demented kaleidoscope of images from De Chirico, Tissot, Toulouse Lautrec, Daumier and maybe Van Gogh; oneiric piazzas, petite bourgeoisie, belle époque bordellos and gambling dens, the lumpen proletariat on public transport or at the table.

A book that I read recently noted that the members of the extreme ends of Britain’s class system have more in common with each other than with the middle. The immovability of the upper and lower classes’ positions frees them from constrictive middle-class niceties regarding what is good or appropriate. The point is not that Landolfi is well born, which is quite obvious and irrelevant. It is that he doesn’t worry about what should be said or done. He never justifies himself the way an anxious middlebrow viewer of art would: “I don’t know anything about modern art, but I know what I like.”

Landolfi knows what he likes and basta.

Landolfi likes life, which is less fatuous than it sounds. He embraces chance, disorder and distraction. He travels exclusively by public transport — third-class trains and buses. He does not do this out of a condescending desire to fraternize but out of relish for the better chances and people they offer. This is gambling in a broader sense, taking what life throws out. Landolfi also gambles in the narrower sense too. His (mis) adventures in casinos inspire reflections on the deeper meaning of a “lair” (lustra) as he retreats to a Venetian hotel room with sandwiches and a cheap bottle of wine, or on the belle époque after a losing night at Montecarlo.

In Venice he writes about the man renting sleeves outside San Marco to cover scantily clad visitors to the basilica. At Petrarch’s house he goes for the poet’s embalmed and immured cat. He eavesdrops on conversations — on polenta in the Padua train-station buffet or on a discussion between a barber and waiter on the terribly mispronounced “psyche” of the latter’s wife. He is a voyeur, climbing a wall to spy on a flirtatious young couple. He is as varied as Fellini but without the self-consciousness or satire. His eye for the grotesque — a boy vomiting on the bus to Frosinone — is pitiless but not judgmental. He is sentimental, dragging his suitcase down from the rack overhead to share pictures of his daughter with a nonna in his train compartment. He is social and occasionally garrulous, hearing out a chauffeur on the “harmonic cylinders” (guaranteed to win) of the roulette wheel or taking his garbage man out for a dawn coffee after another losing night at the casino.

Landolfi’s pictures and irony can make the reader laugh aloud. But reading him is not easy. A good Italian dictionary is indispensable (a pocket English-Italian one will not do). His language demands mental flexibility and the reader must be open to neologisms and unexpected sfumature and allusions. His long sentences burst with embedded clauses that require grammatical study; now where did that subject go?

Unlike many Italian writers, Landolfi’s erudition is neither arrogant nor obscure. Sheer linguistic joy rather than a desire to impress propels his rich lexicon and baroque sentences. His intellect is broad and his syntactical complexity comes from wanting to cram it all in, not to show it off. He can trip up in his enthusiasm for all the back-stories, parentheses and ramifications. High language and lowlife rub against each other, thrown together by the same chances that fill train and bus seats.

In “Se non la realtà” we rarely see a monument or a landscape, even in places full of them. But we meet characters — including Landolfi — who could only live in Italy and in the 1950s. Landolfi takes us up and down the Italian peninsula to places we may have been, but have never really seen.