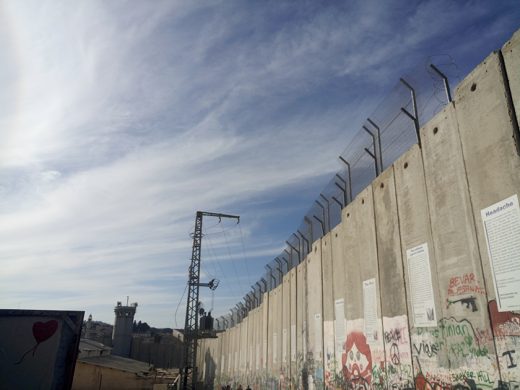 Last year, on a trip through the Middle East that included Israel, Lebanon, Jordan, and Palestine, I was surprised to find the greatest sense of joie de vivre was in the country in which I least expected to find it: Palestine. Yes, Israel had its share of joke-telling taxi drivers, and, yes, I saw children joyously playing on narrow cobbled walkways of Jerusalem’s Old City. Still, these kinds of occasions were rare.

Hiking through Israeli streets, whether near the new air-conditioned Mamilla Mall at the Jaffa Gate, or along the traffic-choked, polluted byways of coastal Haifa, I couldn’t escape a sense of oppression. The faces I saw during my travels, whether those of Jews or Arabs, bore a wearing mix of exhaustion and determination — not surprising given the region’s seemingly endless history of violent torment.

“What a way not to live,” I told myself in silence.

Lebanon was no better (or worse). On those faces I saw barrenness in keeping with the texture of much of the land itself.

In a small corner of Jordan, I made my way to the royal tombs at Petra. There, vendors huddled in masses, eager to sell anything to passersby to feed their families, or so they told me. I had expected no exuberance in either Lebanon of Jordan, but the sullenness of both gave my travels a joyless dimension.

I assumed I’d feel much the same way in Palestine, specifically on the West Bank. This dim view made what I found there all the more shocking.

A Ramallah coffee house brimmed with young people chatting wildly. I felt suddenly transported to a student café in Berkeley.

Israeli citizens cannot visit the West Bank. Signs posted every few miles warn that any such visit is in violation of Israeli law. They are also putting their lives at risk.

The six of us in a minibus (with Palestinian driver and guide) were of little interest to the armed guards at the checkpoint.

Holding foreign passports, our papers in order, we sped off into parched brown land desolate but for a dotting of small Bedouin settlements. The roads we took were often ringed with barbed wire fences, many with signs warning pedestrians not to cross the fence line – landmines were everywhere, in particular along the Jordan River. (These mines are now being removed.)

Most imposing was what Israelis call “The West Bank Barrier,” known to Palestinians as “The Apartheid Wall.” The 25-foot high wall is topped with razor wire and pocked with machine gun-equipped watchtowers. In all, it runs more than 400 miles along Israel’s West Bank border. It’s a disturbing sight, and I cannot fathom what it must feel like to live behind it. In fact, it reminds me of a World War II prisoner of war camp. Many of the one-time businesses and homes near the wall are now abandoned, many of the mute facades riddled with bullet holes.

In some respects, my trip was what’s now referred to as “Dark Tourism,” a term applied to visits to places that have known war, death, and hunger.

Renowned street artist Banksy has drawn on West Bank buildings in an effort to call attention to the plight of Palestinians who live there. The infamous wall is lined with comments from Palestinian children who describe how they ache for a happier life, though none seems in the making.

We are escorted through the wall, past the bullet-hole pocking, the barbed wire, and the land mines.

We then enter a poor world in which Palestinians are clad in threadbare clothes and wear paper-thin sandals. This would seem to be the bleakest passage of all. And yet we’re met with the brightest smiles I’ve seen at any time during my trip.

At the Jordan River — the baptismal site of Jesus Christ — a stream of water so narrow a tall man might straddle it, men gleefully played hacky sack and applauded each other.

Guards at the tomb of Palestinian leader Yasser Arafat posed for us, and chatted in English as best they could, visibly pleased to be among visitors.

A Ramallah coffee house brimmed with young people chatting wildly. I felt suddenly transported to a student café in Berkeley. All of this sat just a few miles from a great green monstrosity of a wall, and weapons, and a legacy of sectarian combat. ‘Tis a puzzlement.

The Israelis will tell you the wall, a deterrent cast in stone, saves lives, and perhaps it does. Before construction began, a Palestinian terrorist walked into a toddler day care center in Tel Aviv and blew himself up, killing more than 50 children. Since the wall went up, there have been no such incidents. Our trip itself was curtailed by security concerns. We had planned to visit Hebron, but recent knifings of Israeli police made it best not to go.

I do not pretend to understand the complexities of the Middle East, let alone propose solutions. I have none.

But of the countries I visited, Palestine seemed to me to possess the greatest joy. Some might make sense of this by citing a biblical verse: “Let us eat and drink, for tomorrow we die.” But I’ll leave such pondering to others. I do know that some people can live on hope itself, and there is worse nourishment.