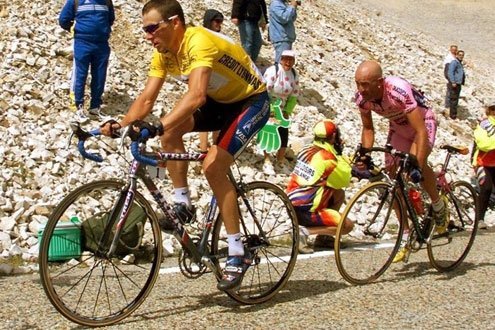 Armstrong and Pantani battling during the 1998 Tour de France, won by the Italian. He died cocaine overdose in 2004.
I

n October 1998 I traveled from London to Paris to interview an American cyclist named Lance Armstrong. Persuading my editors that he deserved prominent treatment wasn’t easy. He’d done well but not spectacularly in that year’s Tour de France, a race marred by widespread doping allegations that few imagined would soon devastate the sport. A bald Italian with a bandana, “The Pirate,” Marco Pantini, won the race. Six years later “The Pirate,” 34, was dead of a cocaine overdose.

How important, my USA Today editors asked, was a conversation with a Texas bicycle rider attempting a comeback? They agreed only because the comeback was from cancer, a sellable story line. In American journalistic parlance, the disease was the “angle,” the soft spot intended to make the report compelling to those who wouldn’t otherwise care.

I took a cab through a Paris downpour to a small hotel on the city’s outskirts, where Armstrong was competing following the cycling world championships in Holland. His performance there had been middling. He joined me at a corner table in the empty restaurant, looking little more enthusiastic than the weather. Though only 27, he already seemed older, his face pale and slightly spent. Little about him suggested Texas quarterback clichés. I drank coffee; he sipped water.

I knew about his cancer, but not in detail, which he gave me with a straight face. In 1996, only two years before, his malignant left testicle had been removed. Cancer was then found in his lungs and abdomen, for which he received intense chemotherapy. Soon after, tests revealed malignant brain lesions, removed by emergency surgery that left him temporarily blind. Overall, the October-to-Christmas 1996 therapy involved four, three-week chemo cycles. But the paralyzing treatment worked. He was in full remission by mid-1997.

He was, his oncologist told me by phone, a “flag-bearer” for “all cancer survivors everywhere,” a man of “incredible will” who “refused to go back to be a school teacher or a truck driver or a doctor.”

Armstrong, as yet unrefined in public relations, was more modest in tone, or so it seemed. “I have what people in the field call the ‘obligation of the cured.’ I’ve been through it and I’ve come out of it. I’m fine.”

But it was a peculiar kind of fine, shaped by the medication that had saved his life. He was softly awed by the “amazing” drugs that had reversed what some suggested was a potentially lethal decay. Among the many cycling figures soon to figure in drug investigations, he was possibly the only one to see chemicals as lifesaving, providential, even routine. Their flow and manipulation had a tonic side. What is now called his grand fraud formed part and parcel of a love affair with the magical chemistry he endured to save his life, making him uniquely predisposed to the rapture that would eventually undo him. Drug enhancement’s invasive routine, syringe content their milk, were to him routine. His old sense of treatment became part of his new disease.

I knew none of this at the time, though like many who followed cycling I saw it as the most punishing sport ever devised by man. My mountain rider heroes pushed ahead for hours at near-vertical angles, defying gravity and resisting incomprehensible exhaustion. Many would run off to vomit after the end of road race stage. Plenty raced with fevers and flu.

With testicular cancer, Armstrong’s oncologist told me, “you either make it or you don’t really quickly.” Armstrong’s swift return to competitive racing seen in the context of the treatment he’d received was, for the doctor, almost incomprehensible, “a miracle or good medicine, or a combination.”

Even on that rainy day in Paris, Armstrong was sensitive to the miracle and unconsciously developing a “chosen one” status. His salvaged body already geared to chemical invasions, he saw no reason why it couldn’t take more in the service of his ever larger and increasingly obsessive “obligation,” which gradually became a self-fulfilling addiction to a superhuman celebrity status that arose around him.

“I race to prove it can be done,” he told me that day. “To prove that you can be on your deathbed, be treated with some of the most toxic chemicals in the world, be operated on, opened up, cut up, pieced back together, and recover.”

But heroism can be toxic and temporary. Cult status yields to myth-making, arrogance to defiance, defiance to denial, after which comes the fall.