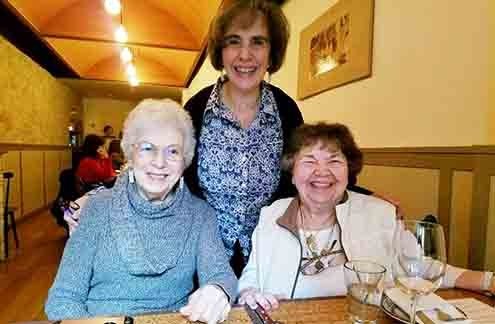 The author, center, with Stella and Nellie.
I

am in “Ammerica” on my annual cookbook tour. I’ve been working nonstop for five months to be able to fly to the other side of the planet, attend cookbook dinners, and tell tales of Umbria at various cultural institutions. In between the public events, I plan to visit my many friends across six states, cook in their fabulous kitchens and enjoy being treated to the joys of delicious food, wine and friendship. Halfway through the trip I’ve already been touched. One group traveled nearly two hours to see and dine with me. Someone else delayed surgery. One person flew from Texas to Philadelphia. Several hosts have taken time off work to help me out. I’m being treated like royalty.

Yet every time I’m here I can’t help pondering my Italians predecessors who came to this country in droves a century ago, many of them starved and desperate, often with no one to help them once they arrived, their families split up for decades and sometimes forever.

My great grand father emigrated from Sicily to the U.S. sometime in the 1920s with three of his four children. My grandmother Rosaria was the youngest of the family and didn’t want to leave her boyfriend Giuseppe. Her only escape was to elope and as a consequence they married when she was only 14. I don’t know the details of that part of her life or what it meant to be a child-bride. I don’t know exactly why my great grandfather had to emigrate, though it’s easy to imagine. I do know from my mother that Rosaria had a rose in her hair on the day of her marriage and she was beautiful.

I also know she never met her siblings again. They wrote to each other for some 60 years, and while they might have had the means, they didn’t seem to have the courage to fly across the ocean — many rural Italians were afraid of flying. Rosaria died in the late 1970s.

This morning I’m on a train to New York City where I’m hosting a cookbook dinner in an East Village trattoria. Nellie and Stella, two of my mother’s cousins, will be there. We didn’t even know about each other until recently. They still have family in Umbria, of all places.

Stella is 80 and looks exactly like my grandmother Rosaria. Nellie could easily be an aunt. My mum would have adored being here. We would have laughed and cried while feasting on our food.

It’s taken almost a century to for this family reunion to happen, and guess what, I’m crying on the train. Silly me, I am so Italian.

This recipe for Falsomagro in bianco was among my mother’s favorite. The falsomagro or farsumagru refers to stuffed lean meat. Basically, it’s a large braciola, or chop.

The rich stuffing was intended to stretch portions so the meal could feed whole families while using inexpensive ingredients such as inferior meat cuts, bread, a little fat, and a bit of cheese. Grandma Rosaria, who became a widow in postwar Sicily, fed her six children like kings by stuffing everything with bread.

Despite its modest background, falsomagro is a splendid dish. It’s tasty in a very Southern, garlicky, herby, Italian way. Since you can prepare it in advance and serve at room temperature, it’s also an excellent party dish — and fairly healthy since the red meat portion is relatively small. Now I need top crying and get started.

Each slice makes one roll, more than enough for four people. I always make 2 rolls and freeze leftovers.

— Before stuffing, place the meat on a cutting board and beat it flat with a blunt meat pounder.

— Arrange the slices of guanciale over the slices of beef, sprinkle with bread crumbs, pine nuts and raisins, then top with the cheese, eggs and a twist or two of black pepper. Now roll it. Beginning with the side nearest you, roll up the slice, gently pressing on the filling and making sure it does not slip out from ends. Tie the roll crosswise with string at 1.5 cm (3/4-inch) intervals, then tie one time lengthwise.

— Heat a cast iron casserole pan over medium-high heat and when hot add 2 tablespoons olive oil. Add the meat and brown it evenly, turning every few minutes. This step will take about 5-10 minutes, depending on the size of the rolls. I prefer to brown one roll at the time, but it’s up to you. Keep the pan covered to avoid messing up your cooktop.

— Using tongs or thick plastic gloves transfer each roll to a sheet of parchment paper or place inside an oven bag. Season rolls with salt and pepper, arrange a quartered onion along each roll, sprinkle with one tablespoon white wine then seal the paper parcel or oven bag and transfer in an oven tin.

— Roast for 30 min turning once. Remove from the oven. The parcels will have puffed up with steam. Cover and let the chop rest 20 more minutes. Indirect heat will cook the meat further, but keep it moist. This will also stabilize the rolls. If you slice them when they’ll still hot, they’ll fall apart.

— When cool enough to handle, cut the parcels open and pour the cooking juices and onion in the same casserole you used used to brown the rolls. Reduce over high heat until creamy and liquidize with a blender. Pour onto a serving plate. Slice rolls and arrange on top of the sauce on the serving plate. Cover until ready to eat or briefly rewarm in the microwave.