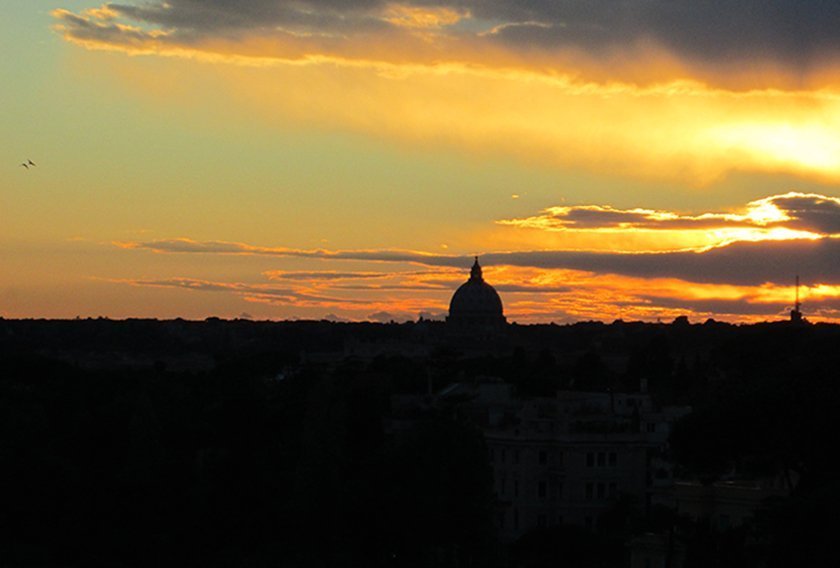 Over time, the confusing early days spent in a city can come back to roost in the form of deep nostalgia.
I

was first called l’americana at my host family’s dinner table in Rome nearly two decades ago. After college, I lived with “La Signora” (the lady of the house) and her daughter Bianca, who, like me, was then in her twenties. The other children were grown, and the father had just died. I lived there for free in exchange for teaching them English. They were a wealthy family, and lived in the posh, post-war Parioli neighborhood.

Every Tuesday evening, La Signora had her women friends over to play Canasta, a rummy-like card game. The women had big, salon-styled hairdos, and smoked skinny cigarettes. After cocktails they’d play canasta in the living room, with La Signora summoned Bianca and I to the table for the delicious food she’d prepared. It was there that I tasted many Italian specialties, including involtini and saltimbocca, for the first time.

At the start of my stay, the dinner conversation often turned to me. The ladies were curious why, of all things, I’d come to Rome “all the way from America” to study the country’s “extracomunitari,” the Italian term for non-European immigrants. In fact, the term had pejorative connotations, especially among conservatives — and Parioli was filled with them. I never reminded them that I was technically an extracomunitaria myself, since U.S. citizens have no ties to Europe or the European Union.

I was instead branded “l’americana” — The American — a label la La Signora used once at dinner. “Mamma, she has a name,” Bianca implored. “Call her Cristina.”

Though I thought that l’americana was more playful than offensive, I was delighted that Bianca, who’d taken little interest in me until then, had seemingly come to my defense.

I tried to explain, in my limited Italian, that the outcome of that war had laid the foundations for equality in America.

But I wasn’t off the hook yet. La Signora continued to probe my nationality. “Cristina, what do you think of the outcome of the Civil War in your country?” she asked. “Because don’t you think that blacks up North are a little too cocky?”

Stunned, I looked for help from Bianca, whose name means white, but she looked as expectant of an answer as everyone else.

My Italian wasn’t yet good enough to advance this kind of conversation. Still, I tried to explain that the war’s outcome had created the foundation for American egalitarianism.

At another dinner with just La Signora and Bianca, I asked them which Italian politician they supported. Barely looking up from the talk show on the little television in the kitchen, they said, one just after the other, “Fini.”

I didn’t know much about Italian politics, but I knew that many of my Leftist friends considered Gianfranco Fini to be a neo-fascist. I couldn’t weigh in on that, but I did know that in my bedroom — which had belonged to a daughter who’d ran away from home — maps and pictures of Italy’s African colonies hung on the floral wallpapered walls. There were books by Gabriele D’Annunzio, considered by some to be a Fascist writer.

I’d never been interested in politics, but suddenly I found myself steeped in political context, caught in the middle of Italy’s turn-of-the-21st century political extremism. I was studying with a Communist professor who deplored America, or as he said, the “Yankees.”

Neither extreme felt quite right to me, and for the first time in my life, I felt homesick for America. I thought about my maternal grandmother, a lifelong Democrat. Her father, a farmer and coal miner, was a labor unionist. Her mother, my great-grandmother, was born in Italy, in the little house in northern Italy that my family visited as a child. Our distant relatives greeted us with a chorus of “si, si, si.”

Growing up, I was eager to shed these hardscrabble, working-class roots, but suddenly, the very people I’d wished to disassociate myself from were those I missed most.

Growing up, I couldn’t wait to escape my working-class roots, but suddenly the very people I’d wished to escape were the ones I missed most.

I felt a similar sort of homesickness the night Donald Trump was elected president. Like many Americans, I was shocked and disappointed. The bullies have won, I told myself. Not surprisingly, recent studies have shown that bullying in schools is on the rise. So is gun violence. We live in a culture in which vulnerability itself is under attack. Trump is just a symptom of deeper cultural woes.

Only after the election did I realize that I missed the Italy I had discovered all those years ago, mostly after the Italy of my Parioli family and my professor. With all its flaws, Italy was a country whose values of compassion, generosity, and intellectual inquiry aligned with my own.

Like many Americans, I joked that if Trump was elected, I would leave the country — in my case, for Italy. I haven’t done that, not yet, but I did begin to revel in memories of the Italy I long ago came to know and love, the place where l’americana came of age.