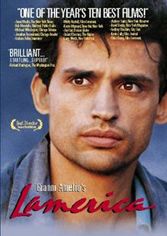 After the fall of the Berlin Wall in 1989, small businessmen Fiore (Michele Placido) and Gino (Enrico Lo Verso) head for depressed Albanian hoping to make a buck by promoting a shoe factory that will get them government funding they then intend to embezzle. They find an elderly Albanian, Spiro (character actor and true life fisherman Carmelo Di Mazzarelli), and install him as their lackey CEO. But Spiro, a disoriented former political prisoner, wanders off and Gino must track him into the lunar hinterlands of Albania to keep their investment and scheme alive. The trek fundamentally alters the views of the scam artists, suddenly forced to confront the an Albanian reality they’d put aside as irrelevant to their money-grubbing.

Director Gianni Amelio’s film was and remains groundbreaking effort, particularly since the migration of Albanians to Italy has continued unabated since the early 1990s. Few contemporary movies dig so effectively into the complications of post-Communist exploitation, and even few carry with them so open a debt of conscience (Albania was an Italian colony under Fascism.)

Here, Amelio forces Italian amoralism and compassion to coexist under the same roof, which they often do. The cynics turn into human beings and the nameless oppressed into people of substance, with their own systems of love and greed. Indispensable viewing.