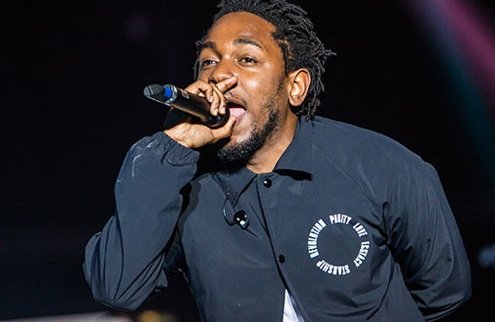 he art of rapping is under the late winter spotlight in the form of two high-profile practitioners from opposite sides of the Atlantic.

For anyone with a passing interest in the pop music of the English-speaking world, Kendrick Lamar‘s name ought to sound familiar. The Los Angeles rapper, a studied acolyte of hip-hop history and devoted believer in the power of music to produce social change, completed his rise from critical pick to fan favorite with 2015’s lauded To Pimp a Butterfly. Its ambitious musical direction and dense, conflicted lyrics on the nature of the black American experience were (and still are) emblematic of the times. It was among the year’s most talked-about records.

With less than a week’s notice and hardly any pre-release fanfare, Lamar has pleasantly surprised with untitled unmastered. (Interscope), a collection of scattered tracks recorded during the Butterfly sessions but that didn’t make the final cut.

On the one hand, calling it a formal return is unfairly misleading. This isn’t exactly a proper follow-up, working instead as a bookend to Butterfly‘s magnum opus. Kendrick’s calls them demos “in raw form. Unfinished. Untitled. Unmastered.” Additionally, they’re not all unfamiliar: “untitled 03 | 05.28.2013.” and “untitled 08 | 09.06.2014.” were both previously performed live in separate late night television appearances, and a section of his “untitled 08” verse was used in a Funkadelic song.

On the other hand, there’s no one else with Kendrick’s throwback talent and youthful star power right now, and untitled unmastered. makes it clear why. The guy is mesmerizing. He dissects his Compton streets, capitalism, religion, race (“unmastered” isn’t just a musical reference), and living in a frayed America. It’s an expansive sonic fusion of hip-hop, funk, soul, R&B, and jazz.

For listeners who struggle to cope with the hook-driven prominence of rappers like Drake or Future, or those let down by Kanye West’s botched rollout with The Life of Pablo, here’s where to find hip-hop’s traditional heart.

Freed from Butterfly‘s sense of self-importance and notwithstanding false starts and recycled verses, untitled unmastered. transmits many of the same messages and themes far more tersely but to much the same effect. They may be treated as afterthoughts but Kendrick Lamar’s drive never rests. Neither does his music.

Meanwhile, in England, London’s Kano provides comfort to those who have weathered grime’s fallow period with his long-awaited new record, Made in the Manor (Parlophone).

The East Ham native must have sensed that the time was right. A peer of luminaries like Dizzee Rascal and Wiley, Kane Robinson was an early regular in the conversation as grime’s 8-bit-based sound and wildly local personalities took hold globally. But after the initial wave of excitement (in which 2005’s Home Sweet Home played a part), the style was neglected until Skepta’s “Shutdown” and Stormzy’s “Shut Up,” both released in 2015.

In the intervening years, Kano issued a steady stream of retail full-lengths and the odd mixtape. But Made in the Manor marks his first release of either kind in four years. It feels like a lifetime’s work come to fruition.

Like Lamar, Kano draws on personal experience in open letters to his estranged half-sister (“Little Sis”) and a former friend (“Strangers”). There are the details of his neighborhood (“Drinking in the West End”) and repeated efforts to take stock of who he’s become and how he got here.

Made in the Manor begins inauspiciously. The full-on heavy metal guitar loop of “Hail” is a dreadful half-speed red herring. The moody “T-Shirt Weather in the Manor” feels like a pop lunge before turning dark in the second half of its exhausting five minutes. “New Banger” could charitably be described as not that.

Afterward, however, the album settles down for what turns out to be Kano’s most comfortable mode: open-hearted bard. The contemplative “This is England,” “Little Sis” and “Endz” form the emotional core of the record. Over beats dominated by plaintive piano notes, Kano sheds myths of his larger-than-life persona to reveal a man burdened with doubt, fear and regret.

Long-lingering singles “GarageSkankFREESTYLE” and “Flow of the Year” feel tacked on (and sound that way, too). But despite its flaws, Made in the Manor more than suffers the revelations of its owner. Even with appearances from Wiley, JME, Blur’s Damon Albarn, and Giggs, it’s Kano’s show. He’s learning. He’s growing. He knows what time it is. And he knows what made him.