L’albero degli zoccoli (The Tree of the Wooden Clogs) 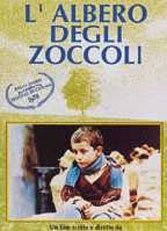 Olmi’s Bach-suffused masterpiece is a pastoral lullaby that comes with a rural Billy club. Take neo-realistic musing to one extreme and you get fictional documentary, in this case a view of 19th century Lombard peasants going about their hardscrabble livelihoods. Since outright documentary turned Olmi down, he compensates by populating the film with the real thing: Peasant farmers and local boys he put before the camera for the only time in their lives. The language they speak is a Bergamasque dialect so liltingly inflected that even the Italian version came with subtitles. If you think Italy is homogeneous, think again.

Since story begs metaphor, education is the ticker here. The rural vision is seen partly through a clever boy’s eyes, walking the more-than-country mile to school. But his shoes break. What does a poor family do to ensure their child continues his educational odyssey? Yes, a tree is involved. And no, poverty doesn’t equal happiness, churning the leftist butter of the time.

The pace is pure countryside and daily life informed through Catholic surges and simmering passages, including courtship, weddings, animal slaughters, and upriver expeditions.

Though the film was released to rave reviews and prizes (Cannes), only hardcore lovers of Italy and observant filmmaking felt were inclined to sit through its painstakingly beautiful three hours. At the same time, rural life in 1898 had no camera to film it. For all intents and purposes, Olmi invents one.