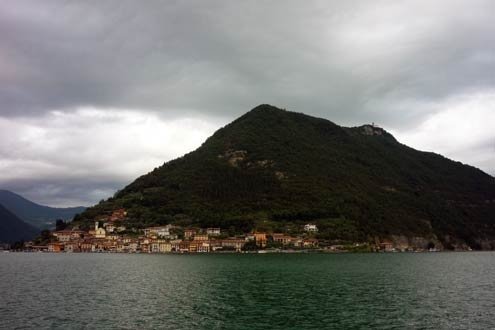 Monte Isola, with Peschiera Maraglio in the foreground. Photos by Andrea Smith.
O

Lago d’Iseo, which borders the northern provinces of Bergamo and Brescia, lies between Lakes Como and Garda in Lombardy’s lake district. On it is Monte Isola, a 4.5-kilometer mountain whose 600-meter peak makes it the highest island peak in Europe.

Marino and I have driven on highway A4 from Milan, past Bergamo to Palazzolo exit, where state road SS469 took us to a series of roundabouts and provincial roads, ending at the town of Sulzano on Lago d’Iseo. We’ve parked and walked down to the pier.

It’s a five-minute ferry ride from Sulzano to pier 1 in the town of Peschiera Maraglio (187-meters) on Monte Isola’s southeast corner. As thunder claps in the distance, we decide to skip climbing to the Sanctuary of the Madonna della Ceriola (600-meters) and opt for a nine-kilometer stroll along the lakeside road that circles the island. It’s an easy, quiet, three-hour walk. Aside from local services, no motor vehicles are allowed. The 1,800 residents drive scooters.

From the pier, we go left and away from Peschiera Maraglio, which we’ll visit on our return. We’re walking counter clock-wise around the island toward the village of Carzano. This way, we’ll be in the sun, if it ever comes out. Right now, it doesn’t look promising.

In a few minutes we pass a boatyard. Even on this dull day, the shellac gleams on a “naecc,” a traditional long and thin wooden fishing boat. On the other side of the road, hiking and mountain-bike trails lead to Senzano and Cure.

Soon we reach the narrow streets of Carzano. The wind picks up. The lake is choppy. Boats hurry towards the shore. We stop at the café at the port while rain pelts down. Even the ducks head for cover. Next door, the butcher advertises bike rentals and picnic hampers. Business doesn’t look good today.

The rain subsides and we set off. As we reach San Giovanni Battista church outside Carzano, the last droplets yield to splendid sunshine. By now we’re in Paradiso (literally the name of the town) where olive groves and campgrounds look north to Isola di Loreto, a private island. Rolling emerald hills and distant Alps frame the lake.

On Isola di Loreto, the lone villa with its tower resembles a small, medieval castle. Rebuilt after years of abandon, it was originally erected in 1902. A noblewoman from the Oldofredi family founded a convent on the island in the 13th-century, which Costanzo Ferrari later documented in his 1846 historical novel “Tiburga Oldofredi.” Documents dating back to 1696 show the island as the property of the Martinengo family. It would change hands several times over the centuries.

After Paradiso, terraces of olive trees and vineyards line the road. We head to Siviano, the “capital” of the island whose narrow, medieval streets bustle with the island’s services. Voices rise in a dialect reflecting a territory long contested by rulers of Lombardy and the Venetian Republic. In the square is the 13th-century, 20-meter-high tower of Martinengo. The 15th-century Villa Ferrata and other later period villas overlook the lake.

We walk to Sinchignano, an agricultural center that produces wine, olive oil and abundant quantities of fruit. Two huge wooden barrels and a press sit in front of the renovated villa padronale, the manor house where lake view apartments are for sale. At a fork in the road, the left street ascends to Senzano while we instead descend on the right to Menzino.

Passing through the lanes of Menzino, we find a cobbled path with a sign marked “beach.” Down a flight of slippery stairs we reach the Baia di Silenzio, then pass a boat dock to a lakeside park with picnic tables where we lunch under olive trees. A father and son swim by. We loll in the July sun, dosing while the lake laps against the break-wall.

Later, we ascend to the beach sign and then descend the path towards Sensole. We pass more picnic tables near a rowing club on the southern Baia del Sole. With no houses along the waterfront, this is a pretty, natural spot. Above, the 14th-century Rocca Oldofredi castle overlooks Isola San Paolo, another private island.

Soon our path runs up to a concrete wall. We backtrack to a steep trail leading to road. We debate climbing 400 meters to the sanctuary but by now the afternoon sun beats down. We’re lazy. The smell of fresh fish frying entices us to Sensole.

Here houses crowd the lanes along the once-quiet bay. Chopin and George Sand, who once lived and worked here, would not recognize it now. Boaters dock near the busy restaurant while tourists flock from the piers of Peschiera Maraglio. They pass by without noticing the cat colony. We hadn’t seen a cat anywhere. Here, dozens of cats curl up together on a shady, fenced-off hill.

Near Peschiera Maraglio, the waterfront is brimming with cyclists and families eating at tourist stands. Years ago, we saw only racks of drying fish here.

In Peschiera Maraglio itself we find tucked-away corners that still preserve at least some of the flavors of the old fishing village. The town was famous for its nets. Today a shop sells net bags and t-shirts. But the Ristorante Milano hasn’t changed. It’s al completo, full up, with a local clientele enjoying its Sunday.