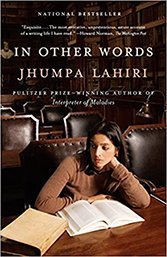 I resisted reading this book when it was first released to much fanfare in 2016. The idea of an established American writer moving to a fancy neighborhood in Rome in order to “learn Italian” to then write about it (in Italian) seemed pretentious. At least, it seemed to fly in the face of how most expats and Italophiles, myself included, typically and organically stumble into Italian — usually by falling in love with the language (or someone fluent in it), and then losing themselves in it. In other words, they go by feel. Lahiri’s endeavor, titled “In Other Words,” from the outside, seemed like an artificial construct.

But with quarantine time on my hands I put aside my prejudice and finally read the book. And emerged pleasantly surprised.

Though Lahiri is an acclaimed English-language writer, she didn’t translate her own work. She left that task to Ann Goldstein, renowned in her own right. I focused mostly on the likeable translation. The prose is spare and simple. I am fluent in Italian so some bits troubled me. For example, Goldstein’s decision to translate sciocchezza as “trifle” seemed somehow to sell that nuanced word short. “Trifle” may be more elegant than “nonsense” (written or spoken with verve), and certainly more British, but “nonsense!” seems to say it better. Una sciocchezza is, to me, a “bit of nonsense.” Bit this quibble may itself be a trifle.

A dictionary was the first book Lahiri read in Italian. She’d bought it in Boston before her first trip to Florence during her graduate school years at Boston University. Of that trip, she writes, “From the start, my relationship with Italy is as auditory as it is visual.” The London-born Lahiri then had private tutors in America and made a few trips to Italy — mostly to attend literary festivals — before deciding to move to Rome in 2011. There, she began writing a diary in Italian, passages of which would eventually become part of this book, titled Dove mi trovo in Italian.

Lahiri’s observations and insights about the Italian language are less interesting than her own journey with words themselves. Raised by Indian immigrants who moved from Britain to the U.S. when she was three, her native language was Bengali — a language Lahiri never fully mastered. English came to Lahiri, she writes, as a “stepmother.” She embraced English when, at six or seven, she began reading books in English, the language she would fall in love with and in which she would become a successful writer, a Pulitzer Prize included.

In the Italian language, though, Lahiri escapes that success — as well as her self-perceived failures in English. Her own “imperfection,” she says, when writing in Italian liberates her. She writes, “Imperfection inspires invention, imagination, creativity. It stimulates. The more I feel imperfect, the more I feel alive.”

This book is ultimately a writer’s journey. As she says, “Writing is my only way of absorbing and organizing life. If I didn’t write, if I didn’t work with words, I wouldn’t feel that I’m present on earth.”

Lahiri’s fascination with Italy did not end with this book. In 2019, she compiled and edited “The Penguin Book of Italian Short Stories.” This time around, she translated all 40 of the stories she chose.