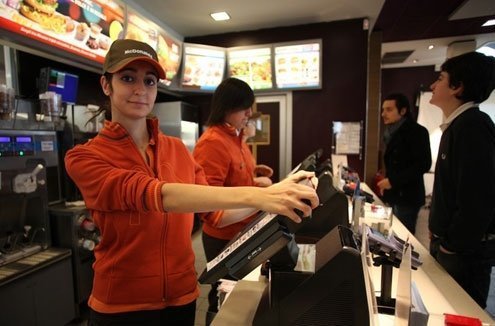 In 2013, Palermo offered youth jobs galore — at McDonald's.
I

’ve lived in Italy for almost a decade. I shrug my shoulders when foreigners bring up deficits, bureaucracy, Mafia or tax fraud with a snigger of superiority. No country is perfect.

And then last week, a rerun of “The Two Greedy Italians” pushed me over the edge. If you’ve never seen it, it’s a BBC show about Italian-English chefs Gennaro Contaldo and Antonio Carluccio returning to cook in Italy.

As they fawned over pasta-making primary schoolers and lamented the high number of one-child families, my blood boiled. Then they started listing the virtues of homemade tomato salsa and I exploded.

It’s so frustrating to hear people idolize an Italy that no longer exists. I read a blog ages ago about an expat who dared to suggest Italian mothers were no longer the doting, suffocating, meddling stereotype. She went on to say Italian women no longer care about their children at all, which is a touch extreme, but I see her point.

My parents were dragged kicking and screaming from their respective corners of Italy to Melbourne, Australia, when they were children. They met, married and instilled in their three first-generation offspring sugarplum visions of a perfect Italy where everyone was cultured, food savvy and blessed with thick, healthy mustaches.

Conned and enamored, I packed up my things and moved to Tuscany as soon as I turned 18. It took me less than six months to figure out that the Italy of the 1960s silver screen with its rosy-cheeked Southern families of 15 kids no longer existed.

Gennaro and Antonio can cry all they like about children growing up alone, but when the camera stops rolling and they go back to their English homes pay check in hand, Italian families still have to make ends meet with one kid.

It doesn’t help that they spend the better part of a decade at university. Most Italians regard themselves as youths well into their 30s. I met a woman at the doctor’s who thought she was too young to have a child at 37. Considering how long it takes them to get a job and settle down, it’s a miracle they manage to have one kid.

And shock horror! Most of them have little Gianmarco out of wedlock. With all do respect to Pope Francis, modern Italy has more Communist sympathizers than Catholics and all of them are perfectly happy without that piece of paper.

Living with mamma until well into your 40s is commonplace. The mayor of my hometown of Manciano does. Casa sweet casa in Italy is a high-rise palazzo built in the 1960s with a pastel paint job and antiquated fixtures. With low wages and an inflated real estate, most families couldn’t afford any better even if they wanted it.

Italians will berate their government for not supporting Made in Italy design while fighting for a car park at one of the hundred supersized IKEAs. They’ll elbow you in the face for a €300 couch that is made in China while complaining about how everything is made in China.

Back in the car, they’ll scoff at wearing seat belts in the back seat, but insist on using their headlights during the day. And when they finally return home without having used their indicators once, they won’t be making pasta all’Italiana.

I have never met an Italian family that gets together to squash kilos of tomatoes into sugo. It might just be me or it might be because you can buy a three pack of sauce from Coop for less than a euro. And while you’re there, pick up what is probably the country’s biggest selling item: bottled water. Even in the towns and cities where the tap water is perfectly fine to drink, Italians prefer the bottled stuff. They also can’t get enough of pre-grated Parmigiano, which has experienced such a growth in popularity that it’s being considered as a VAT-exempt item for 2014.

Then again, Italy is not immune to globalization, no matter how hard The Two Greedy Italians and every other television show ever made on Italy for an international audience pretend otherwise. The younger generations want to be American. They want to dance to Jay-Z, wear low-slung jeans and have inappropriate English words on their t-shirts.

In fact, they haven’t created a new Italian word in generations. Why bother, when the English word will suffice? Learning the language is all the more easy when “computer” is “computer” and “killer” is “killer” — pronounced key-lerr.

The most popular clothing brand in the country comes from Spain and the only people who still dress in that quintessentially stylish Italian way are the elderly or the foreigners who can afford the designer brands.

The country has serious economic problems, massive unemployment rates, incredible youth disillusionment, and it’s addicted to cigarettes. It will vote Silvio Berlusconi back in if given half a chance and it will continue to evade taxes for as long as possible.

No matter how hard you close your eyes and hope, Italy will never again be that country where men and women dressed to nines drink an espresso at a bar and then saunter to a home-cooked long lunch. Now it’s up to foreigners who wax nostalgic but have no idea about the difficulties of modern Italian life to get a life.