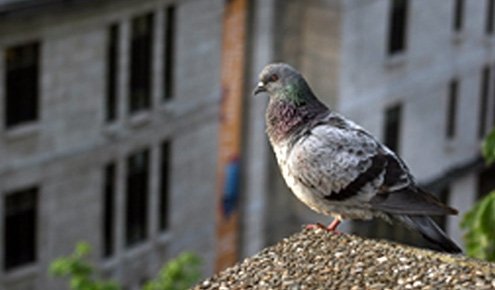 Gertrude charmed me. With the exception of some occasional cooing, she was a quiet and unproblematic guest.
T

he beginning of spring brought longer days, excessive allergies, and daily visits from Gertrude. A round, doe-eyed pigeon, Lady Gertrude, or Gertie, as my sister and I called her, began frequenting my bedroom terrace, hopping purposefully throughout the scattered maze of flowerpots left by the previous renters.

“You should try to scare her away,” a colleague gravely advised. “Think of all the pigeon shit you’ll have to clean up.”

My friend Chiara has a phobia of birds, so much so that a flurry of crows feasting on a bag of potato chips once sent her into tears. She even refuses to eat poultry: on Thanksgiving, we served her tortellini instead of turkey.

Word of my new tenant horrified her. But despite their warnings, Gertrude charmed me. With the exception of some occasional cooing, she was a quiet and unproblematic guest, and the terrace was still spotless (I made a point to smugly tell my colleague).

A week into her stay, I received a breathless phone call from my sister — “Gertrude’s expecting.” Sure enough, two delicate white eggs lay nestled into one of the terracotta flowerbeds, visible under Gertie’s protective gray wing. She cocked her head at us, merrily, blinking rapidly. She had that mom-to-be glow.

My sister and I took Gertrude’s impending motherhood seriously. After all, she had chosen our home, our balcony, us — and we felt honored. “Out of all the apartments in Rome, she ended up here,” my sister said in hushed tones, as we peered at Gertrude through a crack in the blinds. We soon nicknamed the terrace the maternity wing, and deemed it off-limits until Gertrude’s babies were grown and gone, sailing away into the sunset to begin their little pigeon lives.

I tried to explain this to Suresh, who cleans our apartment every other week, but his Italian is limited and my Bangladeshi non-existent. “Balcony — no — because pigeon — has nest!” I fervently declared. Suresh shook his head, confused. I bought him new gloves and stracci, or rags, to prevent him from retrieving the usual set, stored outdoors where Gertie resided.

At this point, my full-time magazine job had come to an end (I was only filling in for someone on leave), which meant more time at home. As I sifted through wanted ads and half-heartedly revised my resume, Gertrude kept me company, separated only by the glass balcony door. I tucked the curtain aside with a clothespin so I could keep an eye on her. I empathized with her. Here she was, embarking on motherhood, while I was beginning the next phase of my career, whatever that was. We were both suspended in this strange, middle unknown, she waiting for her chicklets, me for a job response. My kinship with her grew.

I took breaks in between creating a Linkedin profile to browse online forums dedicated to pigeons (who knew the pigeon community was so vibrant and enthusiastic?) and learned that pigeons are monogamous for life. I found it deeply romantic. Meanwhile, my group of friends and even my doubtful co-worker began to rally around Gertrude.

“How is she doing today? Send pic!” beeped my WhatsApp chat.

“Any baby news?” asked another.

My sister and I came home to a notice pinned on our door, urgently requesting us to call the supervisor. “Do you think they know about Gertrude?” my sister asked nervously. Was harboring a pigeon against apartment rules? It turns out we just had to make an appointment to have our gas meter read. We sighed with relief.

And then — as quickly as it started, it was over. I peeked through the window to do my hourly check on the maternity ward, only to see Gertrude’s flowerbed completely overturned. My stomach dropped to my knees, and I scrambled onto the terrace. Gertrude was trapped underneath, and in a rush of adrenaline, I lifted the terra-cotta. I watched as she flew away in terror, the tip of her wing brushing my ankle. I put on Suresh’s yellow cleaning gloves, and scooped the soil back into the pot, then found the eggs, two perfect, pristine ovals, and arranged them back inside the flower bed. Then, I waited.

She returned a few times, but never sat on her nest, only nervously strutting about the terrace. After the first nightfall, I knew the eggs would never hatch — according to pigeons.biz, without their mother’s warmth, the chicks were goners. Devastated, I tried to understand what had happened to cause the flowerbed to fall. Was it the wind? An aggressive seagull? Did Gertrude shift her weight the wrong way and topple over?

“I feel like I failed her,” I texted my sister. “You didn’t!” she responded immediately. “You saved her. Imagine if you hadn’t been there. She could’ve died.”

I miss Gertrude, even weeks later. I hope wherever she is, she’s happy, and that she’ll have another shot at motherhood. A cluster of gray feathers still remains, poking out from the flowerbed. So far, I’ve received no response to my job applications.