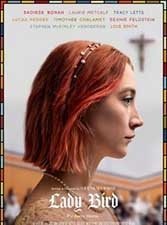 “Lady Bird” is both a coming-of-age film and a dark mother-daughter comedy that stars the gifted young actress Soarise Ronan (“Brooklyn,” 2015) in the title role. For the first half, the high school senior struggles credibly, acerbically and thoughtfully, to fashion a coherent, authentic version of the person she wants to be. She dates charming Danny (Lucas Hedges), only to discover he plays for the other team. She lets herself go in poignant and hilarious drama club performances starring her chubby girlfriend (a scene-stealing Beanie Feldstein). She wishes she were anywhere else than boring Sacramento, California.

In the midst of an extraordinary performance, Ronan is abandoned by Greta Gerwig’s witty but sometimes reckless script, which has Lady Bird saying and doing things that violate her smart and aware essence. She cheats and lies. She steals and dates a self-obsessed outlier (Timothée Chalamet). In an out-of-character moment, she interrupts the anti-abortion assembly speaker at her Catholic high school with a vile and vulgar diatribe. It would be comforting to know that these and other expressions of teenage angst will result in a certain maturation, but the ending undermines any such closure.

The script doesn’t do any better by her one-dimensional parents. Dad (Tracy Letts) is sappy nice, even after he loses his job. Mom (Laurie Metcalf), although a psychiatric nurse, is unrelentingly nasty and mean-spirited to Lady Bird. In one scene, she berates her daughter for using two towels while bathing, claiming the extra towel will wreak havoc with her laundry routine. At a critical juncture, she refuses to talk to her, apparently for weeks.

Writer-director Gerwig, known mostly as a talented young actress, has been widely praised by critics and filmgoers for the script and directing. The cast is loaded with star power. For all that, “Lady Bird” is not this year’s “Moonlight.”