Ladies at the hairdresser 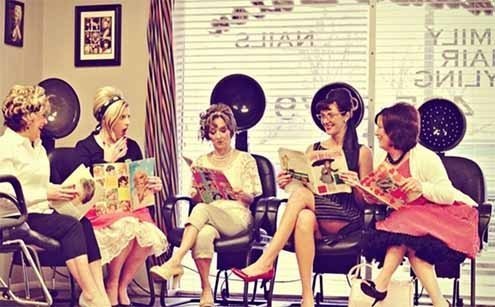 Like it or not, story-telling central has a venue.
&

#8220;You should leave it all to me.” The “it” is an inheritance. One of the hairdressers at my local salon is recently divorced. Her husband left her for a younger divorcee and refuses to pay child support. I don’t think she’s being serious, but the white foam burning the edges of my scalp distracts me.

I had told my hairdresser I wanted to go lighter. Get me as close to blonde as possible without turning orange, I fold her. But I know how this ends.

The woman with the inheritance is sitting next to me on a bright blue stool. She’s in her late 70s and is getting the Old Italian special, bottle blonde with short curls.

She’s also unhappy, and her youngest daughter gets most of the blame. The daughter is also divorced and owns the only lingerie shop in my Tuscan town of Manciano. She’s dating a younger man and her mother is thoroughly disappointed.

“Age is just number,” the hairdresser tells the woman. She should know. She’s fooling around with a man 25 years her senior. My husband Giulio told me and I was supposed to keep it a secret, so don’t tell anyone, okay?

When I tune back in, the woman has moved to another subject: how poor she is. She owns Hotel Verde, the semi-abandoned hotel behind the supermarket. It’s how I imagine the hotel in “The Shining” would look in summer. It’s a multistoried palazzo with green shutters, peeling yellow paint and a large empty lawn.

Hotel Verde was the backup location for our wedding. Thank God it didn’t rain.

They’ve had to do a series of renovations on the hotel, none of which she can afford. Her husband recently died and her two children and grandchildren are strapped for cash and want their inheritance.

The magazine I’m leafing through is filled with stale celebrities who aren’t natural blondes. As is the salon. I’m beginning to regret this my hair color mission.

At this point, the woman is almost in tears. I’d tell you her name, but I honestly don’t know it. Lucrezia? I think. I’ve never met her and in small towns, people tend not to introduce themselves. They just assume you know who they are and get very snippy if you don’t.

I head off to have my hair washed and miss a huge chunk of the woman’s story. The sink cuts off the circulation to my spine, so I distract myself by trying to read what’s written on the trophies that line the top shelf. Is my hairdresser an amateur volleyball champion? She doesn’t have the build for it.

When I sit back down, I avoid looking at the mirror and stare instead at the sky blue smudges of paint at its base. They’re meant to conceal decades of hair dye splatter, but they only draw more attention to them.

When I tune back into the story, the woman is being scolded by her hairdresser (“You should leave it all to me.”) The woman sobs about how she has nothing left. She’s given everything to her son and daughter, who don’t speak to her. She lives in a run down room in the hotel she can’t afford to repair but no one wants to buy.

But the tales of woe continue. The woman says she’s in trouble with the tax collector and blames her accountant for not doing his job. My hairdresser clicks her teeth and reproaches her for having taken advice from an accountant.

I glance at my phone. My husband is on his way to pick me up. The woman sees me and diverts her complaints to millennials. Her grandchildren are always on their phones when they visit her. People walking down the street are nearly hit by cars because they’re not looking. No one is interested in having a real conversation anymore.

My sympathy is waning. We’re all hostages to her story, until she is bathed in hairspray and gets up to leave. Her hairdresser bids her goodbye with one final tu morirai in un ricovero (you’re going to die in an old people’s home).

After she’s gone, my hairdresser tells me she’s all that’s left of one of Manciano’s wealthiest families. Her children wasted all their money, but she can’t summon the courage to sell everything and retire to Rome.

Her hairdresser laughs. She seems heartened by a story worse than her own. My hair is dried and styled. We both pretend it’s not orange.