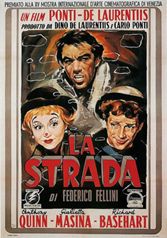 Dimwitted and destitute Gelsomina (Giulietta Masina) is sold to a circus strongman and finds herself on the road in poverty-stricken postwar Italy. Fellini was never able to duplicate the physical vitality of his circus fable. Gelsomina, who has Chaplin-like sadness, is caught between a wise fool (“Il Matto,” Richard Basehart) and the whimsical tyranny of the Zampanò the strongman (an anvil-like Anthony Quinn). She’s mistreated and humiliated but refuses to surrender her idealism and is transformed into a naïve metaphor for endurance and saintliness. As she’s beaten down, Zampanò loses the will to exterminate of her character. He’s redeemed by her spirit. But he can’t control his temper, and the fool pays the price.

In the early 1950s, with Italy in postwar tatters, the ambiguous relationship between rage and redemption and ambition was front-and-center. This is a film about moral outsiders who know no way in.