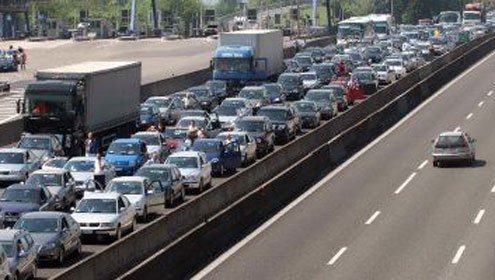 The annual rite of return means heavy highway traffic well into September.
I

have always sympathized with the French fuss over “La Rentrée,” that moment when the country returns to the city and school and work life is revived after the communal August vacation. For me, still a student at heart, the smell of new school supplies and Earth, Wind & Fire’s “September” say “It begins again” better than champagne bubbles.

Though Italy runs off for its own French-style August vacation and Italians are ever alert to the commercial possibilities of imported rituals (the enthusiasm for Halloween is a good example), Milan’s own rentrée — the rientro — seems limited to a storefront window display by an expensive French children’s store.

Perhaps the difference is that the French are centralizers. France has a national scholastic calendar decreed by its education minister. This is followed by press conferences announcing the slate of programs state TV will air over the coming season. Teams hold special rentrée football matches and national newspapers report on the rentrée’s progress. Supermarket and restaurant chains compete over discounts.

Despite the inevitable photos of backed up autostrada traffic, Italy’s return to reality is closer to a desultory summer tide. Those who have fled to the countryside to visit relatives or have vacation homes tend to trickle back.

Near my apartment, mothers have begun lining up outside the school bookstore, accompanied by children with bronzed skin and sun-highlighted hair. Tennis shoes, stiff and new a few months ago, are now soft and faded. Summer clothes that fit in June are hand-me-down ready. The mothers’ bright summer-print dresses and jeweled sandals have dulled. Mother has also delayed taming her beach or mountain hair until she can see her regular hairdresser (considering the rientro “fix” too important to leave to unknowns). Within days, Dad’s baggy shorts and linen shirts are ironed and hung high in the wardrobe. The usual trim trousers and shirts are back.

No matter their provenance, the stuffed vehicles hog apartment building driveways and snarl traffic with protruding rear ends and open tailgates. Families argue over whether to take each carload to its final destination or just dump it out at once and carry it up in stages. Fuming neighbors irritated by the returnees stab at elevator buttons made sluggish with cargo. Tired children slump on heaps of goods and chattels, thumbing listlessly through dangerously incomplete summer workbooks. Every car contains a crate of vegetables, purchased or given, and a case or two or demi-john of wine. Italy, it’s evident, remains rural at heart.

Some vacationers come back with more exotic gear, a Mexican sombrero, “I [heart] NY” T-shirts, duty-free cigarettes or bottles of retsina and ouzo their owners hope will somehow re-ignite August’s dying fire. As airport conveyor belts chug and squeak, complete strangers commiserate about American/Chinese/Greek Australian ineptitude with pasta and how lucky they were to have brought a supply from home.

Some stare wistfully into the void or doggedly at phones, clinging to the fading wisps of summer romance. Jet-lagged, sunburned and hung over, they push their groaning carts into the waiting arms and cars of nonni or siblings who did not — or could not — go the far-flung route.

But some things did get done during the summer exodus. Streets were repaved or reconfigured. Like evil elves, Italian municipal governments use the summer to invent new traffic patterns, which they claim, often dubiously, are an improvement. Woe to those who fail to check if their familiar one-way street still is. Some shops —more in recent years — wilt and die like uncared for like August plants. More affluent shops use the month to remodel or expand.

A household linen store that appeared dead before I left has been re-born at twice its size. Behind the covered windows of local shops, dusty mannequins and empty shelves await their stock.

Through the torn and yellowing paper concealing my favorite store’s storefront, I see the proprietors surfing waves of plastic bubble wrap that flow from cartons of fall merchandise. Winter delights hang in plastic bag chrysalises waiting to hatch when the thought of wool no longer brings shudders.

Soon, the city’s leisurely pace will pick up. Milan’s nursery schools and kindergartens are already open, with secondary school to come. The city hits warp speed when international buyers arrive for the annual Fashion Week.

For now, outdoor cafès broadcast the voices of friends re-uniting over aperitivi. Evenings are cool, but drinkers still wishfully don “the” Ibiza dress or espadrilles that leak Mediterranean sand. People laugh over vacation memories while already dreaming of the one to come.