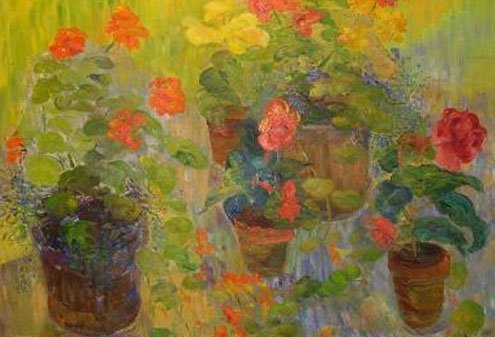 Barrenness where colors were.
I

n the early 1970s, a man named Giovanni Scanga began a stream of civil suits against my mother. He lived a floor below her and disliked her direct access to the condominium terrace, which she decorated with small vines and pretty plants.

A trained lawyer who had never practiced, Scanga lived alone. His wife left him early in their marriage, taking with her their only child, a son. The independently wealthy Scanga appeared to occupy his days with these nuisance suits, which gave him cause to chat constantly with lawyers. Apartment-oriented civil litigation is part of Rome’s lifeblood, an agreed-upon means of personal assertion that often reflects the wages of envy. Wrongheaded people (and families) become convinced they’re right and make that conviction a mission, complicit a Napoleonic legal bureaucracy predisposed to entertain rancor indefinitely, albeit advancing in snail-like increments.

But the little suits devastated my mother. They had a vendetta’s intimate ugliness. Worse still, they dragged on, with years turning into decades. Though Scanga eventually lost most of his filings, their cumulative weight led my mother to withdraw the “incriminating” flowers from the otherwise drab terrace. It regained the barrenness it had before, to Scanga’s apparent content. She was brokenhearted.

With the plants gone, he turned his attention to other malfeasance, first an improperly placed pipe, and finally even my mother’s right to terrace access. The last suit before I left Italy in the mid-1980s asserted that she had no “legal right” to enjoy the outdoor sunlight, which, according to the papers wasn’t hers to enjoy since it didn’t belong to her. The reverse astuteness of the spite startled me. She in turn just suffered more, while saying less and less.

Little more than a year after the sunlight suit she was diagnosed with terminal cancer. I flew to Rome and brought her back to the United States, where she died after a brave but sullen fight. She is now buried at Rock Creek cemetery in Washington, D.C.

Even in her final days, her once-strawberry blond hair withered, she rued Scanga’s willfulness. He’d undone her final years in Rome, she said. What quarrel could there have been with plants and the enjoyment of sunlight? “Dispetto,” she murmured, “for spite.” I stroked her forehead and agreed.

But the malignity made genealogical sense — if that’s the word — since Scanga’s father had been a Fascist official in good standing, a conformist character in a European 1930s made rigid by those eager to follow the letter of the law and its orders. The father produced an arrogant, churlish, and greedy son, something I came to learn first hand, when after my mother’s death he continued where he’d left off, filing suit against me, this time over yet another pipe. He was, to use the discreet language of another age, a disagreeable man.

The pipe suit against me was finally settled a decade ago, by which time he’d “retired” and moved to the Lazio town of Formello. I met him in court, albeit briefly. He expressed twitching condolences over my mother’s death. Responding to forged grief seemed pointless. I nodded and walked away.

Yesterday, a neighbor sent me a Rome newspaper link titled “Choc a Formello,” which, indulging the excitable side of Italian journalism, began with this description:

“He struck his father in the head until dead, after which he threw his body in the basement. He then changed, washed himself off, and went to sleep. All this happened in a fortress-like villa in Formello, the residence of Giovanni Scanga, 75, the owner of numerous Rome apartments. Police say Scanga was killed by his son, Franceso Scanga, 30. Father and son had allegedly argued over money, with Giovanni Scanga refusing his son’s request for financial assistance. According to police, Francesco Scanga then used a blunt object to strike his father repeatedly in the head.”

I read and reread the account and allegations and then went downstairs to my portiere, the building’s custodian, who knew Scanga, his estranged wife and son, and my mother. I looked at him dazed, my arms spread wide, speechlessly ready to speak, but he pre-empted me. “Chi semina racoglie…” he said — “You reap what you sow.”