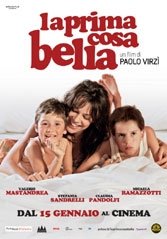 In the 1950s, American sociologist Edward Banfield coined the term “Amoral familism” to describe the social structure of southern Italian village in which family ties dominate and eventually strangle other socially useful institutions such as government and the rule of law.

Director Paolo Virzì’s trite film gives Banfield’s term new meaning. Flashing back and forth between 1970s Livorno and today, it follows the family of a beautiful, disorganized and sometimes just plain dim mother (Anna, played by Micaela Ramazzotti and Stefania Sandrelli) and her two children as they careen from man to man and “house” to house.

On the way, it touches every tear-jerking stereotype Italian cinema has mustered over the past five decades: terminal illness, domestic disputes (including wife-beating), shouting in apartment hallways, a mother whose fierce love manages to enrich and demolish at the same time, and a happy view of provincial life stuck in some mythical past where poverty and ignorance is warm and fuzzy. Worse, it offers saccharine reassurance that as long as it’s family, anything — disorder, egotism, slacking off — is forgivable.

As for amorality, consider Virzí’s fadeout. The family overcomes all its old differences to celebrate their mother’s deathbed marriage (veteran Sandrelli plays the adult Anna). Never mind terminal cancer, the pert and perfectly made up Anna embraces her children and sings the songs that got them through hard times. The word for this is insulting.

No wonder the film — which never made into general distribution outside Italy — was picked as the country’s official entry in the Best Foreign Language Film category of the Oscars. Sentimentalism is the name of the awards game.