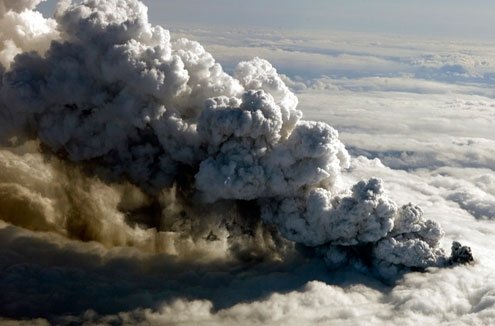 rom my Rome balcony, I count the noises. It’s Sunday Noon. Below, a child shouts. Down the private alley, a motorbike revs, the kickstand pulled. In the distance, church bells peal. There’s a car alarm and a few honks.

After that, nothing. Silence.

It’s as if a spring day had turned down its modern obligations and sprinted headlong into summer, into August, when Rome more than most Latin cities mutes its hot afternoons, conserving reptilian energy for the scented night.

But the truth of this day, taking stock of the news, is ash. Not the Lenten kind but volcanic. The closest airport to my balcony’s view is Ciampino, a former military airport that acts as a European low-budget hub, feeding mostly Britain, France, and northern provincial airports throughout the continent.

The high altitude cloud — la nube, a phonetically sinister Italian word — has shut it down. The missing noise in my world is that of aircraft coming and going. My day-to-day sky, ever cluttered with the whooshing and whinnying of jet engines on final approach, has been thinned to white.

What a trickster, nature, giggling at its human occupants just when they think they’ve sized up the workings of every imaginable natural lever. A little lava in the night air and parts of the manmade world are made to freeze — all because of primordial events on appropriately-named Iceland, a vast and volcanic place that mesmerized Jules Verne (his own favorite volcano, Snæfellsjökull, fictionally opened to the center of the earth).

Nearly two generations of world travelers are spoiled. They expect to move, always and quickly. A terrorist threat, fine; but a volcano? Now?

Yet only 50 years ago, in 1960, transatlantic traffic depended as much on ships — liners and sundry steamers — as aircraft, and among the planes, piston-powered props still outnumbered jets (that would soon change). Most of the stalwart prop planes refueled in Ireland and Newfoundland. The London or Paris to New York odyssey usually took some 20 hours in all. Jets cut the time in half thanks to near-doubled speeds and increased fuel capacity. Nonstop entered the vocabulary.

But the ash-cloud contains an irony that isn’t lost on veteran pilots: Prop planes can fly through most mush, their blades acting as scythes. Props still handle most disaster-zone missions, landing on grass or dirt. It’s finicky jets that swallow air whole, churning it through voracious fans and mixing it with green kerosene: Ironically, it’s the newer that’s most hindered by nature’s spit.

Yet who can object to such a quiet day? Stranded passengers, of course; those dependent on the connecting whir of travel and trade, which today means most of the urban planet. The “ash losses” number too many zeros to count.

It’s also helpless-making, which satisfaction-guaranteed moderns — me-first in all things — find galling. “Someone fix this,” they seem to shout, exasperated that a consonant-complicated volcano (Eyjafjallajokull) would step out of the Nature Channel and intrude rudely on the normal.

The intrusion is slightly less felt in Italy, where aside from the business-dependent Milan-Rome corridor, millions still travel by train. A third of Italy’s population has never flown. Ever. The country’s rural dimension remains stalwart, accounting in part for a provincial attitude toward politics and the world at large.

As for businessmen, those who fly are more likely headed east than west, their brave new world in no-longer outlying China. London and New York matter less.

Still, la nube unsettles. It reminds some of previous clouds, nefarious ones: Seveso (1976), Bhopal (1984), and the radioactive mantle that slouched westward from Chernobyl in 1986 after a nuclear reactor popped, the fallout figuratively sealing the end of the Soviet Union. The Soviets, once fiercely zip-mouthed, were coaxed into acknowledging the damage done. Yes, there had been a meltdown; yes, there was a cloud; yes, food might be contaminated. Three years later the Soviet empire, differently contaminated, came unglued.

Jet engines whine, particularly as thrust is reduced, like laying off the gas. Mufflers help slightly, dissipating the rocket-roar percussion. The British introduced commercial jet service in 1952 with a plane called the DeHavilland Comet that flew from London to South Africa. The verdict was unanimous: Wonderful but deafening. Then came crashes and five years of back-to-the-drawing board retooling. The Boeing 707 and the Douglas DC-8 muscled into the market for keeps in 1958, with Pan Am flying all-weather jets New York-to-London nonstop beginning late that year. Since then most cities have lived with passing booms.

All the more reason to enjoy today, to lean over the balcony to peer at the boy below me as he kicks a soccer ball. “Goal,” he shouts to himself again and again. Lunchtime is coming and he’ll soon be called in to sit at the family table. I’ll wait for him saunter indoors, for the traffic to recede, for the car alarms to fade away. Today, ash has won stillness from the sky, the air gone silent. I want to listen.