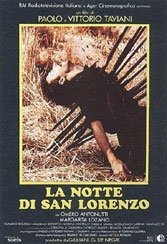 The New Yorker‘s divisive critic Pauline Kael hailed this movie because it combined Felliniesque surrealism with an earthenware feel in the form of a World War II Tuscan town whose inhabitants are trapped between retreating Germans and advancing Americans. In fact, Paolo and Vittorio Taviani’s fantastical snapshot of people mesmerized by events larger than their ability to fully comprehend is a maudlin mixed bag, the spiked folklore of dreams.

The story is narrated through the eyes of a boy, now an adult, facilitating a lyrical if quirky pastoral. When local German troops herd townspeople to the local church, some do as they’re told, hunkering down, gossiping, scanning the night for clues, while other scatter into the woods seeking near-mythical Americans liberators seen less as soldiers than redeeming faeries.

The film’s strength is its sensitivity to opportunism and the Italian tendency to behave ambiguously until the last possible second. Aside from a Partisan hard core, most of the rustic residents are frozen in a never-never land between past and future. Harder moments are the best: The father of a young Fascist collaborator kills himself when his son is shot. It all happens in crackling instant.

The search of saving armies of the night, meanwhile, is part of an enduring Italian fantasy by which outsiders can right all wrongs, in this case after the war’s long day. Among the better films of the lean Italian 1980s.