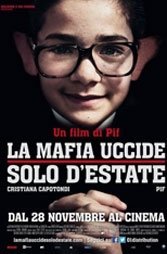 A boy’s hopeless romantic crush, former Italian Prime Minister Giulio Andreotti, ricotta-filled pastry typical of Palermo and two decades of Cosa Nostra violence in Palermo do not make easy cinematic bedfellows. But Italian TV star turned director Pierfrancesco Diliberto, known as Pif, pulls it off delightfully in “La Mafia uccide solo d’estate” (“The Mafia Kills Only in Summer”). The title alludes to the persistent Sicilian myth that the Mafia is either make-believe or some folksy organization tied to friends of friends.

The story follows Arturo Giammaresi (played by Diliberto) from his conception — during a 1969 Mafia massacre — into his 20s, when he (and the city of Palermo) are compelled to face the evil around them. In 1992, huge bombs kill anti-Mafia prosecutors Paolo Falcone and Giovanni Borsellino. Diliberto uses the romantic crush theme to steer Arturo — who loves the seemingly unattainable Flora (Cristiana Capotondi) — through the back-scratching relationship between the Christian Democrat political machine and the Sicilian Mafia, as embodied by one-time Palermo Mayor Salvatore Lima, considered a Mafia ally (but killed by them in 1992), and the all-powerful Andreotti.

Some Italian critics have pinned the movie with a romantic comedy label, but it doesn’t qualify — though Diliberto does take pains to show that romantic love has a chance of surviving car bombs and drive-by assassinations. It’s also been compared to “Forrest Gump” in the way it mingles fiction and fact through snippets of period-piece movies and documentary footage. But Diliberto sets a higher bar. He tries clarifying the complex events that weaken the underworld. Without preaching — and with wit — he portrays the ascent of Totò Riina, a model for a new and more psychopathic kind of underworld boss that endures today, something younger generations might be tempted to forget (arrested in 1992, Riina is serving consecutive life sentences)

“La Mafia uccide solo d’estate” is a gentle reminder of how close Italy remains to the darkness at its core. The opening credits thank Addiopizzo, the Palermo organization that stands by local merchants who refuse to pay protection money, or pizzo, often paying with their lives. Despite its cracks, which appear when Diliberto focuses on the adult Arturo, the film deftly balances darkness and light. It deserves a wide audience.