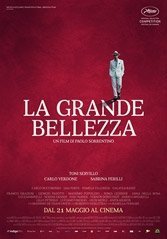 Taking a cue from Federico Fellini, Italian director Paolo Sorrentino plumbs the variously deformed and occasionally beautiful human fauna that populate a fascinating if idiosyncratic version of modern Rome. His centerpiece figure is Jep Gambadella (Toni Servillo), a malaise-ridden writer who was once a leading artistic figure but has lost his mojo — both creative and sexual (much like Fellini’s Guido in “8 1/2”).

Servillo, who played wily politician Giulio Andreotti in Sorrentino’s “Il Divo,” brings irony and affection to Gambardella, a one-hit-wonder novelist who’s traded in his artistic aspirations for hosting and attending Rome’s best parties. The impeccably (almost obsessively) dressed Gambardella goes through social life motions while seeking spiritual and aesthetic balms from — among others — a recipe-obsessed bishop and a stripper. Along the way, viewers get stealthy commentary on the status of women in Italy, the nature of memory, the role of art, and whether sex has redemptive qualities. Though Gambardella finally explains what “La Grande Bellezza” (the great beauty) means to him, it’s hard not to realize that the greatest beauty is inanimate: Rome itself.

It’s rare to see a modern Italian director using film to forage for his owns ideals of beauty, but Sorrentino is intent on doing just that, as well as addressing the skin-deep shortcomings of 21st-century Italy. He’s created an ode to quirky Italian tailoring and to a country that, based on Jep’s layered dissatisfaction, has lost none of its contradictory fascination. Carlo Verdone, who plays Jep’s best friend Romano, and Sabrina Ferilli, the hooker Ramona, both won best supporting actor honors in Italy’s Nastro d’Argento, the country’s top movie prize. The film also earned Sorrentino Best Foreign Film honors at the 2014 Oscars, the first Italian winner since Roberto Benigni’s “La vita è bella” (“Life is Beautiful”) in 1998.