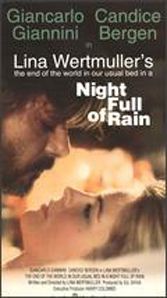 Lina (of the impossibly long and aphoristic titles) Wertmüller and Giancarlo Giannini were stapled to one another for most of the 1970s. She was the crusty, feminist director; he was just Giannini: insufferably handsome, insouciantly working class. What alters the chemistry in “Fine del mondo…” is the presence of Candice Bergen, in her acting prime. Gianni (Giannini), a Communist journalist, falls for American Lizzy (Bergen), a feminist photographer, inducing her to join him in Rome — and for once the Rome in question is gloomy and rainy.

Though Wertmüller presses ahead with her irrepressible leftism (at times dogmatic and annoying) this is really a story of a hopeless relationship. Gianni and Lizzy, now married, have little left except memories of their courtship. Their immediate reality is the grim Rome of the time, a train wreck of vitriol and polemics.

American critics savaged the film, claiming Wertmüller was a social dinosaur (largely because Giannini plays a male archetype unknown in the North American zoo). How could a man as “intelligent and knowing” as Gianni, asked The New York Times, behave so irrationally and crassly toward his wife? Um… In that sense, Wertmuller was in lose-lose territory: she failed to satisfy Italians, who resented Lizzy, and flunked with English-speakers, who called the whole thing superficial.

One nation’s sense of what’s superficial can be another’s take on hearts run afoul (stop here to count the number of movies willing to take a decent stab a cross-cultural relationships involving an American partner). No doubt a foredoomed undertaking, it endures as a challenging and interesting effort perhaps best understood by those who appreciate its Rome context.