La dolce vita is not so sweet 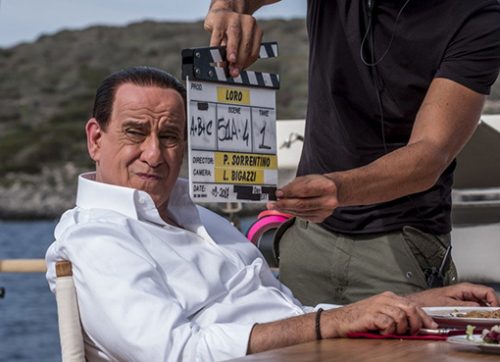 Toni Servillo as Silvio Berlusconi in Paolo Sorrentino's "Loro 1." In Italian, loro means "them," a word often associated with the murky powers that be.
I

“Loro 1” is the first of Sorrentino’s two-part cycle on the life of Silvio Berlusconi, the 81-year-old Italian politician — both the longest serving prime minister since World War II and currently banned from serving in public office because of a tax fraud conviction.

In the first hour of “Loro 1,” Berlusconi isn’t even present in person. Instead, he is referred to only as lui or “him,” and everyone else presumably is loro or “them.” Sorrentino comes close to overwhelming, even boring the audience with countless sexual escapades. For Berlusconi, those excesses gave rise to the term “bunga bunga” — sex parties — and to his trial for a dalliance with an under-aged prostitute (he was ultimately acquitted). Instead of showing Berlusconi cavorting with these scantily clad young women, Sorrentino uses a fictional stand-in called Sergio Morra (a middle-aged Riccardo Scamarcio), who looks a lot like Marcello Mastroianni in Federico Fellini’s “La Dolce Vita.” Morra, a Pugliese desperate to break into the upper echelons of power, peddles women, drugs and sex to influential men, with Berlusconi his ultimate goal. The tawdriness of “bunga bunga” is presented in full force, and everyone knows it’s Berlusconi who was master of this scene. Yet the ex-PM is not physically present.

When Berlusconi — played by Sorrentino’s muse, Tony Servillo — appears, he is more pathetic than crude.

When Berlusconi — played by Sorrentino’s muse, Tony Servillo — appears in the film’s second hour, he is more pathetic than crude. He’s old (Berlusconi’s face lifts, hair implants, and fake tans were the subject of frequent commentary); his lusts are in check; he holds no public office. The Sardinian estate where he spends much of his time is lifeless. Yet he remains powerful (he tells an ex-minister that he is old and Berlusconi himself is not); he lusts but he resists (he looks at the women through binoculars, as a voyeur rather than a participant); he wields power behind the scenes.

Beyond all that (and getting beyond it is a feat) Sorrentino presents this egoistic, often-loathed politician as the prime mover in a love story – a contrite Berlusconi attempting to win back his wife of 20+ years, Veronica Lario (a beautiful middle-aged Elena Sofia Ricci). In the time frame of “Loro 1,” Lario has not yet filed for divorce, which she did in 2009. That Sorrentino can make an aging Berlusconi sympathetic to both the fictionalized Lario and the audience is a cinematic triumph. Keeping Berlusconi one step removed from the ethical cesspool of the first hour, and presenting him as an over-the-hill politician, garners sympathy for this right-wing, manipulative former leader. 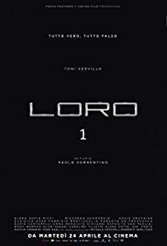 Perhaps appropriately, the poster for “Loro 1” is nearly pitch black.

Sorrentino won the Best Foreign Language Film Oscar for his 2013 “La Grande Bellezza” (“The Great Beauty”), which updated “La Dolce Vita” to the present. In “Loro 1” he does another take on that decadence, but in a more crude setting, one more appropriate to Berlusconi. The director exhibited his fascination with age and loss of power in 2005’s “Youth” (Michael Caine as a retired orchestra conductor), 2008’s “Il Divo” (about Giulio Andreotti – seven times Italian prime minister), 2011’s “This Must Be the Place” (Sean Penn as an aged, retired rock star), and now “Loro.” His obsession with narcissism divorced from ethics includes a youth angle in his current TV series “The Young Pope.”  While obsession is often the mother of creativity, it could also be said that Sorrentino should move on.

For the Italian market, “Loro” is presented in two parts. “Loro 2” is in Italian theaters beginning mid-May. Sorrentino said he plans to combine “Loro 1” and “Loro 2” for the international market, shortening the total screen time. Since he started filming, the #MeToo movement unfolded, making “bunga bunga” even more outrageous, and Berlusconi has said he would consider running for prime minister again in 2019 when his ban expires. Thus, Sorrentino seems to anticipate current events. Whether that conclusion will hold true by the time “Loro 2” is released is unknown. But it’s clear Sorrentino has his hand on the pulse of Italian obsession with decadence, and on current social and political life in the West.