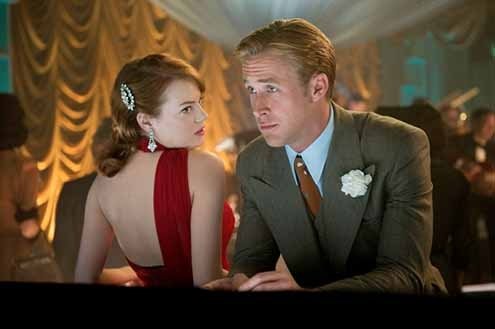 os Angeles is known for sunshine and Hollywood. Less attention is paid to its many dive bars and clubs, the joints that shelter patrons from the glare just outside the door. “La La Land” draws on this duality as a metaphor for the city’s complexity. It opens with an exhilarating tribute to LA as a place of fantasy and possibility — blue skies and the San Gabriel Mountains in the distance — but ends in a dark basement jazz club, a decidedly ambivalent setting that merges success, confinement and failure. Throughout, a surprising number of scenes take place at dusk or at night.

On the surface, the film appears to be a version of the standard boy-meets-girl Hollywood success story, with pluck and luck and bumps along the way. The title alone should give pause, since the term “la-la land” refers not only to Los Angeles and Hollywood, but also to unrealistic expectations. It’s clear something’s amiss when Mia (Emma Stone) and Sebastian (Ryan Gosling) fall in love early on in the movie — too early if film romance is the goal.

They’re a handsome couple in their own la-la land. He’s the beguiling leading man, and she’s the leading lady. They sing (or try) and dance, putting their amateur talents on full display. Their authenticity gives these scenes a certain charm, but Fred Astaire and Ginger Rogers they’re not.

And realism intrudes. In one dance number, Mia pointedly swaps her high heels for tap shoes. How else to dance on cracked asphalt? When Sebastian manages to leap onto a bench in the same sequence, he looks relieved above all. These are tip-offs.

In the movie’s Act 2, the music stops. Aspiring actress Mia and jazz purist/would-be club owner Sebastian plunge into LA’s dark side. There are failed auditions for Mia while Sebastian discovers that the market for the progressive jazz he loves to play and write just won’t sustain him. Work schedules begin tearing away at the relationship. Tension grows and arguments arise. Through all this, it’s refreshing and unusual to see Sebastian summoning the courage and will to soldier on, with Mia’s (too frequent) smile offering sustenance. Sebastian is the one who makes Mia attend an audition that will change her life.

But smiles and persistence aside, Act 2 plays out as the unmaking of the couple.

A truncated Act 3 remakes them, swinging back toward music, but not without exposing the tragedy that’s part, if not the heart, of this story.

Young writer-director Damien Chazelle has fashioned a virtually clunker-free script, a rarity in films that offer ample opportunity for the ordinary and cloying. A huge jazz fan, his 2014 film “Whiplash” featured a jazz student and his abusive instructor. It’s curious, then, that the only scene that falters not only focuses on jazz but features a cameo appearance by actor J.K. Simmons, the instructor in “Whiplash,” here playing Bill, the owner of a supper club who’s hired Sebastian to play piano for his diners and given him a restrictive playlist top-heavy with syncopated versions of “Jingle Bells” and the like. It’s a regimen guaranteed to frustrate Sebastian and unlikely to please patrons, who would surely have appreciated melodies from the 1940s and 1950s — the classic American Songbook-— even if occasionally rendered with a more progressive inflection. When Sebastian inevitably strays from the list, Bill fires him, a gesture consistent with Simmons’ “Whiplash” persona, but nonsensical in business terms.

That scene is a minor misstep in an otherwise credible and engaging film that manages to fashion something new within a familiar formula. We all know what’s going to happen. And then it doesn’t.