L.A. Without a Map 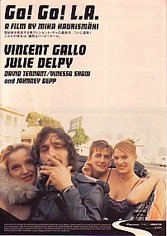 Richard Rayner’s 1989 book is an entertaining travelogue-cum-Hollywood satire that Finnish director Mika Kaurismäki captures genially in this slim but amusing story. Naïve north England undertaker Richard (David Tennant) falls for American starlet Barbara (Vinessa Shaw) while she’s passing through and decides he’ll put death and obituary writing behind him and pursue her to Los Angeles, a galaxy far, far away. Once there, he doesn’t have a clue how to make ends meet, ending up cleaning pools while bumping into the many eccentric and the demented film rogues that populate actress wannabe Barbara’s L.A. universe.

Pretense plays a sweet role: Barbara bills Richard as a writer and he in turn overlooks the fact that her real job is working as a waitress in a Japanese restaurant. Tennant’s love-crazed provincial Englishman gives the story a gentle twist, which Shaw’s pretty elusiveness animates. One is straight-laced, the other coy.

Mika Kaurismäki has his more popular brother Aki’s eye for dark-tinted humor, and while most romantic comedy doesn’t veer in and out of the shade, but this one does, helping bring opposites Richard and Barbara to life.

Vincent Gallo and Julie Delpy turn up the Hollywood backdrop star power, and Johnny Depp has an entertaining cameo, but that’s secondary. Released into video as “Go! Go! L.A.” — maybe to appeal to second graders.