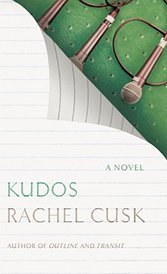 The aptly-titled “Kudos” concludes Rachel Cusk’s trilogy of portraitures she began in 2014 with “Outline” (set in Greece) and continued three years later in “Transit” (set in London). All three novels singly and collectively depend on dozens of eclectic confidences and confessions conveyed by a Cusk-like narrator whose given name, Faye, comes up late and rarely. Few contemporary writers possess the skill and patience needed to make monologue do the whole of their bidding. Cusk does, kudos indeed, and even her characters get around to applause, marveling at how her creations are “provoked into feats of self-revelation by means of a simple question.” At moments like these, Cusk-novelist and Cusk-narrator merge.

This self-revelation is central to Cusk, who uses it to explore the layered vicissitudes of mostly affluent and literate middle class life, with marriage, divorce, motherhood, ambition, self-doubt and the existential and practical complications of being a writer figuring prominently, at times repetitively. The most startling observations her characters make often come in razor-sharp passing. “The one thing that was forbidden to me,” says an unhappily married journalist, “was to desert him in his time of need, despite the fact that I no longer loved him and perhaps had never really loved him, and that equally he might not have ever loved me.”

Such cranky cadences are Cusk’s bread and butter. She loves smart, angst-ridden people; they give voice to her well-groomed melancholy.

“Kudos” picks up Faye several years since her last casting (she has since remarried) while on her way to a literary festival in a European city that feels like a cross between Lisbon and Sofia, at once prosperous but sullen (a theme carried over in its citizens). As always, the narrator-writer plays sponge to the spillage of fellow travelers and acquaintances alike. As always, the strength of the story

hinges entirely on what her “parishioners” have to tell. The most effective speak simply, heartbreakingly at times; the less successful drone on and lapse into caricature.

Her publisher is the latter, enunciating much that Cush doesn’t like about her trade. But the speaker who comes before him, a man met on a plane, speaks poignantly of his troubled marriage, the complexities of fatherhood, and the weight, both literal and figurative, of burying a beloved dead pet.

For every yin, there’s a yang: stories about a tiresome Italian contessa by told by an equally tiresome American writer offset by Hermann, a math-genius and tour guide; Hermann, whose intense relationship with his erudite mother triggers the intelligent friction needed to challenge the narrator’s assumptions. He’s a youthful truth-seeker who, like everyone else, is vaguely burdened by resignation: “We invent these systems with the aim of ensuring fairness, she said, and yet the human situation is so complex that it always evades our attempts to encompass it. ”

Canadanian-born but tied to English self-control, Cusk can be both insightful and insufferable. She appreciates those with a stiff upper lip and disdains those who whine or pontificate. She takes “a penny for your thoughts” and makes it into vivid, credible literature. At the same time, while three’s no crowd, it is enough, and “Kudos” ensures the trilogy ends on a high note.