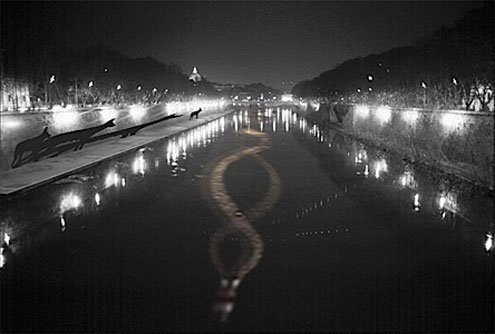 Jones wants the hangdog Tiber to get the kind of attention lavished on the Thames and the Seine.

The Tiber River has engrossed New York artist Kristin Jones since she came to Rome two decades ago. The interest led her to create Tevereterno, a river revival program that will include a multimedia festival set to begin in June 2006. Jones wants the kind of attention attracted by the Thames in London or the Seine in Paris to be lavished upon the hangdog Tiber. The river became more unattractive in 1875 when Rome built travertine slabs to contain annual flooding, and partly as a result, is among the least-cherished waterways of any city in the world.

Tevereterno would bring together filmmakers, video artists, composers and writers in performances along the river. Jones’s project, still in its fund-raising stages, has the support of The Kitchen, a New York City-based nonprofit organization that promotes avant garde art, and the backing of New York Mayor Michael Bloomberg and his Roman counterpart, Walter Veltroni. Amy K. Rosenthal chatted with Jones as she stood on Ponte Sisto, with Ponte Mazzini in the distance.

Legend says Romulus and Remus, the twins who founded Rome, were discovered on the banks of the Tiber. The river has a lot of folklore.

Yes, the city’s mythology is born on the banks of the Tiber, but its abandonment occurred with modernization. While I consider Rome to be very much alive, the Tiber isn’t. Certainly the renaissance of the river along with environmental consciousness could constitute its revival.

Why is an American so obsessed with the Tiber?

Because I think the spirit of adventure and of the frontier is so thrilling. There’s nothing quite like the foolish optimism that it takes to do something as impossible as what I’m trying to do. I wouldn’t want to do it if it weren’t difficult.

What kind of criticism have you heard about the project?

That it’s too expensive, too idealistic and too big.

What’s the total cost of the Tevereterno project?

And the major obstacles?

Fund-raising. And that I’m an American citizen.

Being an American is an obstacle because of George W. Bush, because Bush is the ugliest American of all time, and also because the perception is that we Americans have money. So Mayor Veltroni of course hopes that the funding could be 90 percent American. I wish it could be a matching 50-50. I wish that optimistic and visionary American projects around the world could somehow make up for the insanity of war.

Have New Yorkers been supportive?

Very much so. The City of New York considers this project as a sister city one.

Could the Tiber be used as a commercial transport outlet? For example, people could be connected by riverboat from the center of Rome to Ostia.

I don’t see it as being a commercial transport outlet because the boats are not fast enough or punctual enough in order to be that useful. Also, at the moment, there is nothing going on down there, there’s no place to get a drink of water, there’s no place to sit and the lighting is terrible at night. But it would take very little to do these things.

Have you found Veltroni helpful?

Absolutely, the revival of the river is very much in his heart and mind. He is a man of great culture and interest in film and music, and he also has a spirit of optimism that I might say, from my point of view, is very American. I think he is very much in favor of the project because he maintains that the Tiber is, “Un fiume da vivere!”

Where are you at this stage on the fund-raising side?

Rome has made promises, but if 90 percent of the funding were on the table, the city would pull out all the stops: all the permissions, all the bureaucratic red tape, all the security, all the insurance, all the lighting, and so on. Veltroni struggles with an extremely tight budget, which means immediate public issues take precedence … and the economic support from the city can only be symbolic.

What more do you think you need to do in order to get the festival off the ground?

I need to gather together a substantial Italian committee, somebody significant from the film world and from the environmental world. I need a major Italian artist, a music director and a journalist. I need a really wonderful team of people who believe that together this project can happen. Such a group of people will help me to inspire an American board of directors, which I will create on behalf of The Kitchen in New York. Getting foundation and corporate funding is an extremely promising idea, but there needs to be a major sign from Italy that demonstrates interest and commitment.