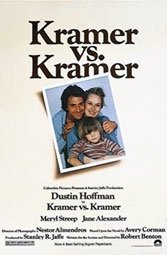 Believe it or not, divorce didn’t always come with standard-issue meanness. More precisely, mainstream moviemaking about divorce’s more hateful sides didn’t make the rounds. And single parenthood, well, even feminism dealt with that gingerly, particularly when custody went to the husband. All of which made director Robert Benton’s film if not revelatory, then certainly relevant.

Self-involved ad exec Ted Kramer (Dustin Hoffman) lands a new account only to come home to have wife Joanna (Meryl Streep) tell him she’s leaving him and son Billy (Justin Henry) — “I’m terrible with him. I have no patience. He’s better off without me.” It’s self-discovery time, or so she says. That leaves Ted’s alone with Billy. No piece of cake but eventually Ted and Billy bond. And then some. He’s helped by fellow single parent and neighbor Margaret (Jane Alexander), who ironically pushed Joanna to leave in the first place.

Ah, but Joanna comes back — and wants Billy. The Flanders Fields of the film begins with the custody war, a ruinously cruel affair for all involved. Joanna wins, but it’s Pyrrhic, setting up a tear-jerking finale.

Two things matter here. The first is the dedication to balanced believability that Ted and Joanna bring to parenthood, and to their adult disagreement. The second is Benton’s apt development of Ted’s compassionate connection to the detail-oriented substance of fatherhood. Billy, he tells his boss, has told him he’s lost weight (“He looks up at me and he says, ‘And it’s all gone to your nose.'”)

Having two landmark figures like Hoffman and Streep in their prime was artistic serendipity, since they’re not only superb but reflective of the generation whose story Benton tells. Plenty about the way the film tracks is maudlin, even silly, but the belief systems of the characters are not. In that way alone it’s a highly worthy film that deserved the slew of honors it received, including Oscar honors for the movie, as well as Benton, Hoffman and Streep.