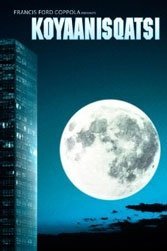 At the time of its release, Godfrey Reggio’s “whole planet” documentary received its fair share of twitter, which in 1982 meant agitation but little else. This video pastiche darted from cave paintings to thunderclouds to military operations to city traffic, full-screen snapshots the human and natural world systematically time-lapsed to establish and manipulate mood. Since “Koyaanisqatsi” is a Hopi Indian word for “world out of balance,” the excited visual jaggedness was in obvious service of a skeptical if oversimplified vision of the pre-Internet, nuclear-worried modern world. All moved too fast, whether rockets or cars, with life’s simpler rhythm’s marred by techno-chaos and a failure to appreciate natural beauty, a Green lament in pre-Green times.

Some called Reggio a “New-Ager,” fully expecting his public service announcement film to include George Winston’s melancholy piano. But that’s where Reggio got the last laugh. He enlisted composer Philip Glass, who connected the jumbled images through a hypnotic, Gothic-Gregorian soundtrack (including Albert de Ruiter’s gorgeously frightening basso profondo), building connected pieces that not only matched the film off-kilter speeds but also seemed to synthesize their every move. Thanks to Glass, this 1980s vision of the perils of modernity is musically infected with palpable alarm: If before you is a vision of the now, what next? The answer has been an even faster planet, most of it regrettably bereft of Glass to interpret it.

Reggio made two more documentaries in this vein (“Powaqqatsi,” 1988 and “Naqoyqatsi,” 2002), but neither packed the visual and aural punch of the underrated original.