Koba the Dread: Laughter and the Twenty Million 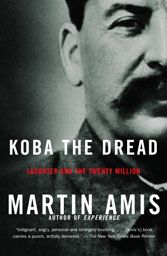 Amis is getting some heavy monkeys off his back. His father Kingsley, an elegant conservative later in life, spent his early days cheering the communist experiment. Martin Amis’ contemporary, journalist Christopher Hitchens, carried the same torch for years. The point of this passionately complex pseudo-memoir is simple: to debunk Stalin and bring him into immoral line with Hitler. In this, Amis succeeds. Stalin killed 20 million and yet was idealized. “When I read about the Holocaust,” Amis writes, “I experience what something that I do not experience when I read about the Twenty Million: a sense of physical infestation. This is species shame. And this is what the Holocaust asks of you.”

Stalin, from beyond the grave, whispers to Amis to do well by him also. This Amis does, using texts and personal extrapolation to ruthlessly chronicle four decades of Soviet mass murder. Koba is history as personal catharsis, effective but bombastic. “There has never been a regime quite like it,” Amis says of Stalinism, “not anywhere in the history of the universe.” An absurdly bold statement, but it’s hard to refute anything but the rhetoric.