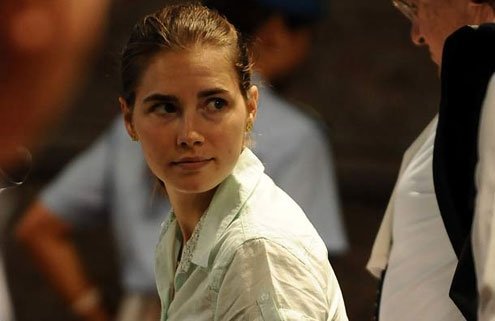 ost likely we’ll never know what happened before Meredith Kerchner’s murder outside Perugia in 2007, and reactions to the conviction and vindication of Raffaele Sollecito and Amanda Knox have been difficult to parse out.

As an American who lives in Brooklyn, I thought Amanda Knox was innocent, while my wife, an Italian-American, also in Brooklyn, wasn’t so sure. But we were both relieved when she was released because the punitive quality of American justice makes us sympathetic to defendants.

My sense of the case may have been biased by how innocent and vulnerable she seemed, but the villainous way she was cast by the prosecution also reminded me of the story of my wife’s aunt, who was crowned town slut in Sorrento in the 1950’s and kept the honor until her death a couple of years ago.

My wife’s opinion, on the other hand, was certainly influenced by her frustration with the stereotypes of Italy and Italians she’s seen over and over in the American and British press.

As I followed the story in the American media, I could not help but think about the last legal case that captured our collective imagination: the failed appeals and execution of Troy Davis, an African American who was the victim of the worst qualities of American justice: racism, evident in the Savannah police department’s handling of the case; corruption, the police’s department scaring eyewitnesses into lying and inflexibility, several courts refusing to seriously reconsider the case despite the change of heart of almost all those eyewitnesses and lack of physical evidence.

The same Italian justice that some Italians deride as weak and American-influenced proved stellar in exactly the ways in which the American justice system failed so miserably.

Amanda Knox was given jail time (albeit already served) and fined for her racist slander of an African immigrant in Perugia. The appellate court efficiently and honorably allowed independent DNA experts to investigate and later testify about the case, and (as is typical, I gather, in Italy) showed the flexibility to reconsider a verdict.

Joy Behar, on the ABC Television talk show The View, complained about the guilty-until-proven innocent nature of the Italian courts (which are actually extremely liberal). But poor black American males can “prove” their innocence all they want but are still often found guilty.

So while Italians bemoan their American-influenced court system, and Americans scorn what they perceive to be a “Banana Republic” trial, I salute Italian justice, mourn American injustice, and am pleased that a pretty and vulnerable looking American girl, who may well be a murderess, is returning “safely” to Seattle.