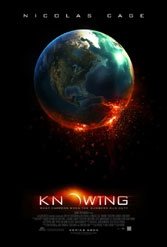 In 1959, students at a Massachusetts high school are asked to draw their images of the future for burial in a time capsule to be opened in 50 years. A girl, Lucinda, star-struck and terrified, scrawls only numbers. Forward to 2009, where MIT astrophysicist John Koestler (Nicholas Cage), an alienated, faithless widower, lives in a Gothic home with his son Caleb (Chandler Canterbury). Quiet, precocious Caleb is a student at Lucinda’s former high school and comes into her numeric vision of the future when the time capsule is unearthed.

Proyas uses the first 40 minutes of the film to lay the groundwork for a good supernatural thriller. When John inadvertently discovers the foretelling function of Lucinda’s numbers — an eerie alphabet of catastrophes — he falls, alcohol-fueled, into the thrall of the ciphers, linking them to his wife’s death.

At this juncture, Proyas must choose between the interestingly ambiguous and the mainstream maudlin. He gives a bear hug to the latter and the story nosedives into drivel. Seeking clues, John meets Lucinda’s daughter Diana (Rose Byrne) and her daughter Abby.

Suddenly, whispering strangers appear, and with them apocalyptic biblical visions. The sun begins to misbehave and tragedies pile up. Gone in a faith-cum-Hollywood minute is both mystery and menace. Instead, desperate parents must decide whether to let their kids become Adam and Eve in amber fields of grace. That taken care of, cometh literally hot special effects. Goodbye planet. That’s all folks.