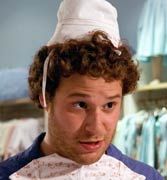 Entertainment TV wannabe Alison Scott (Katherine Heigl) has an improbable one-night-stand with “Me-get-laid” slob Ben Stone (Seth Rogen) and, well, you know. Problem is, this isn’t a movie. It’s desexualized, sentimental vulgarity filtered through a gag prism that takes most all its worst cues from the jargony screech of reality television. It’s a sign of the times — relentlessly awkward and dumb — that apes Jerry Lewis when he sauntered around playing metal retards. Only Lewis knew to make room for slices of subtlety and compassion.

Director Judd Apatow, who pulled off an ironic coup in “Talladega Nights,” milks vaginal humor until the tantrums run dry. The sly parody he nursed through his stock car spoof is nowhere in sight. Nor is the goosey bittersweetness of “The 40-year-old Virgin.” Katherine sulks, shout, and pouts; Ben bongs and babbles. Happily ever after looms. Sure, having babies is in, but they deserve better parents and better writing. A screenplay might help, one that occasionally dispenses with chronic caricature. Insult to injury, the movie is also 30 minutes too long.