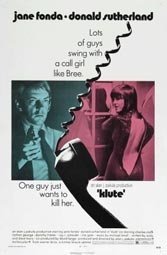 Context: when Pennsylvania executive Tom Grunemen vanishes and police dismiss the only potential tie-in, obscene letters to Bree, family friend Klute agrees to intercede in the Gomorrah that is Manhattan. Enter Bree, wannabe actress and manipulative control freak who confides only in a therapist and is scared of the dark. When Klute taps her phone to learn more, she tries seducing him for the recordings. “Men are easy to manipulate, right?” But upright Klute isn’t what she knows, and vice versa, tinting their connection with an odd but potent romantic dye.

The two soon morph into an improbable but credible tandem as the Grunemen disappearance spills into a series of sexually-motivated murders that start closing in around Bree, who tells her therapist she seeks only “the comfort of being numb.” Fonda gives Bree an aggressive vulnerability that’s both natural and unwavering.

Though Pakula steers his thriller deftly, he seems far more interested in cutting Fonda the necessary slack to bring Bree to nuanced life (she won the 1971 Best Actress Oscar). It’s a knockout performance from one of the most intelligent, gifted, underused, and underrated actresses of her generation, undone —in Hollywood — for her political activism.